Giants’ Week 4 Matchup vs. Saints Will Not Be a “Brees (1 Viewer) 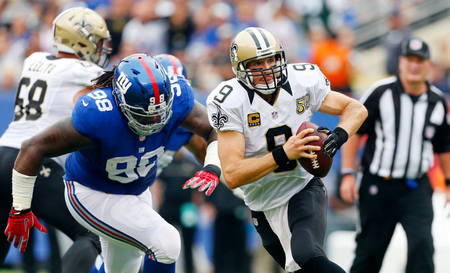 After churning out their first win of the season last weekend against the Houston Texans, the task for the New York Giants doesn’t get any easier on Sunday.

Led by Drew Brees, the New Orleans Saints and their explosive offense will come flying into MetLife Stadium fresh off a 43-point effort in Week 3 against the Falcons. This will be a tall order for a Giants defense that looks improved from a year ago, but still is working out the kinks under new defensive coordinator James Bettcher.

Talk about a measuring stick game for the defense. Fourth in total offense (428 yards per game), the Saints are second in the league through three games, averaging 34.7 points per game.

Head coach Pat Shurmur doesn’t expect a shootout and isn’t planning for one. But he knows his defense is going up against a Saints unit that is clicking on all cylinders right now. And that means his offense will need to step up in a major way as well. ...