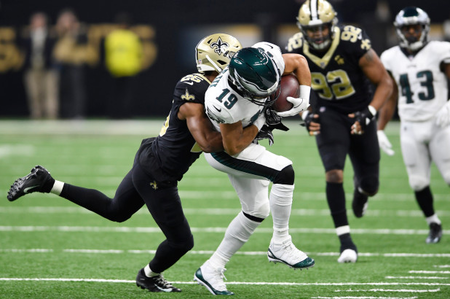 NEW ORLEANS — He did not mean to say it exactly the way it came out, but it sounded so good, so perfect that Eli Apple might as well have planned each syllable and every word.

No, he revealed, he was not “really shocked’’ when the Giants traded him on Oct. 23, forsaking one of their former first-round picks, giving up on the 10th-overall selection in the 2016 NFL Draft at the tender age of 23. Teams usually hang onto their own players with such pedigree, but the Giants have a new front office and coaching staff and one day after a “Monday Night Football” loss to the Falcons, the Giants sank to 1-6 and shipped Apple to the Saints.

“I was hearing a lot of rumors leading up to it,” Apple said Sunday night. “I’m super happy to be here now and be in the position I’m in now. I’m just super blessed.’’

He did not intentionally drop “super” twice in the same sentence but it makes sense it was on his mind. Apple went from the hell that was the Giants’ season to the heaven that he is experiencing in a new, exciting city with a team that is one game away from a trip to Atlanta for Super Bowl LIII. ...