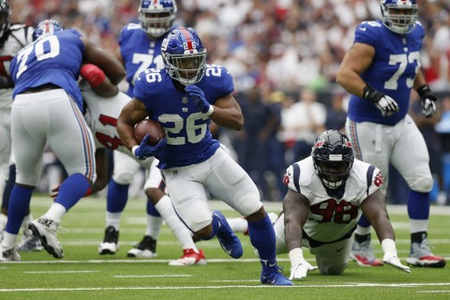 In defensive tackle Sheldon Rankins' opinion, the New Orleans Saints have not seen anybody quite like Saquon Barkley yet this season.

It is the balance and strength that makes the Giants rookie running back so difficult to bring down in the open field, and the sure hands that New York has consistently used to its advantage this season.

"He's as special as I've seen in my years in the NFL," Rankins said. "When you talk about building a running back, he's pretty much how you'd want to build it."

Barkley is sturdily built at 5 feet 11 and 233 pounds and he uses that build to his advantage, but he also has the ability to play with the skill set of a smaller, shiftier back. He is unique and therefore presents a unique set of challenges when it comes to defending him.

"He's his own back," said Saints coach Sean Payton. "... He's built real strong, he's exceptionally fast and he can catch the football well. He does it all for them. He's on the field first, second and third down. He has tremendous balance and change of direction."

The first challenge is simply bringing Barkley down. ...