Good article on Byrd and Bell -The Advocate Underhill (1 Viewer)

Offline
Vonn Bell, Jairus Byrd are starting to form a solid combination in the back of the Saints defense | Saints | theadvocate.com

They’re the sum of their parts. One player doesn’t make or break the group. They succeed together. They fail together. The players realize that, and used some symbolism before last week’s game against the Los Angeles Rams by running through the pyrotechnics and smoke during pregame introductions as a group instead of as individuals.
Click to expand... 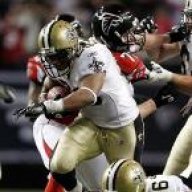 Offline
I don't want us to have to cut Byrd and incur more dead money. Hope we've found his role on the team and he can stay with us for the duration of his contract. He's made some good plays the last few weeks.

It would be a shame to cut him, now that he's healthy AND they can afford to put a pass rush in front of him next year. He is one of the 11 best players on this defense, regardless of salary, and I think keeping him has become the right move. It allows KV to do a bit more of what he does best, IMHO.

Offline
I don't think we'll cut Byrd but I sure hope he takes a pay cut.

Online
I don't know what Byrd did here recently....but he has been playing like the old Byrd. Props to him.

Offline
Wow I didn't know Bell was already making the calls in the secondary. With all the veterans in the secondary and them to trust a rookie to make the calls you know he's doing something right. Awesome choice to trade up for him

Offline
I like the way they are coming together as a group and not as individual players. Byrd has been making more plays lately, let's hope he can start getting some picks along with Bell. With Byrd and Bell playing well together, KV is able to do what he does best.

The Saints have relied heavily on Bell and he&#8217;s clearly earned the team&#8217;s trust. He&#8217;s already making calls for the secondary and directing traffic, a role that he says feels natural to him. But that&#8217;s also a credit to how quickly he&#8217;s picked up the defense.
Click to expand...

that's awesome to hear. Thomas has had such a terrific rookie year that Bell's own excellent play has gone under the radar.

fdl16 said:
I don't want us to have to cut Byrd and incur more dead money. Hope we've found his role on the team and he can stay with us for the duration of his contract. He's made some good plays the last few weeks.
Click to expand...

The dead money next year is actually palatable. 2017 is the year of liberation from his bad contract. There is no way we can pay him what he's scheduled to get. He's an average player...who's aging...with a significant injury history. He either accepts a paycut...or we cut him, eat the dead money, and still afford someone just as good with a savings.

This isn't about hate. This is about business.

Offline
I never jumped on the Byrd hate wagon. Of course he didn't live up to his money, but that's not exactly his fault. Saints offered that much and he took it. I would've too. Then he got hurt. I've never seen so much hate thrown at a player in all my years of watching football.

Injured in the NFL means less than 100%, and in a league where everyone is looking for just a slight edge to get on top of the pile, being hobbled just flat kills you. Then there's the coaching changes and system changes. Byrd always looked out of place. And with the entire defense basically sucking, he took more than his share of the blame.

Well, the defense is clicking, the supporting cast the best it has been in his time here, and now Byrd is doing well. Okay, so he's not a break-the-bank-for safety, but he's a very good player and I'm still glad to have him.

Offline
I liked Bell coming out of college, but his play this year has made me love him. Dude is a straight baller

Offline
I'm about 100% certain Byrd accepts a paycut and stays with the team.

-Knows the system
-no guarantee anyone you bring in is better
-3 safety set is a strength(currently our base)why break it up
-Same dilemma as when people wanted to get rid of Will Smith because he was no longer playing up to his contract. You don't get rid of still good players u ask them to take a paycut that pays them at there level.
-Safeties are important in DA's system
-You upgrade the CB position so that you can use 3 safeties less and start to minimize his role...not just outright cut him when CB isn't a strength. The reason you trade up for Bell is because you missed out on a CB so you draft a Safety and then use Vaccaro as a NB more.

Offline
It should always give us pause when our Safeties have high tackle numbers. But if they are taking turns and rotating into the LOS or very near then this numbers tell me they are sticking their hats on the ball carrier for small gains. The "trooping" of Safeties into the box or LOS also increases their opportunities at INTs and I'm all for that action.

Offline
Byrd and SP seemed to have good chemistry last week. Lots of high fives and smiles. If we even get 1 year ofthe old Byrd, his contract was worth it.
Show hidden low quality content