Good read on possible Free Agents we could target (1 Viewer)

Offline
The Saints' top 5 defensive fixes and the free agents who can help | NOLA.com


The Saints aren't expected to be major players in free agency because of their lack of salary-cap space. But they won't sit on their hands either - especially while they're aiming to revamp their defense under new coordinator Rob Ryan and a new 3-4 system.
Last year, for example, the Saints surprisingly landed four high-priced free agents in Ben Grubbs, Curtis Lofton, Brodrick Bunkley and David Hawthorne -- back-loading all of their contracts to make them cap-friendly in the first year. Grubbs' salary-cap number was just $2.7 million last season, and the others were all $1.7 million or below.
I picked the brains of a handful of NFL analysts to put together a list of available defensive players that might be good fits in New Orleans as the Saints make the transition to the 3-4.
Here is a position-by-position primer, ranked in order of need:
Click to expand...


The Saints' top 5 defensive fixes and the free agents who can help | NOLA.com

Plenty of interesting names I never really thought about, guys who have been relegated to more situational roles due to being behind entrenched starters. He gets thoughts from guys like Adam Caplan, Greg Cosell, Matt Bowen, PFF guys, etc.

2. Glad Triplett (and not Duncan) was the one who wrote this article.

Offline
I could definitely see us going after Victor Butler at LB. Maybe also Mike Jenkins at CB or even bring back Porter back.

Offline
If we do not get out of FA without a decent OLB, I will be disappointed.

Offline
Nice find. Pretty in-depth assessment of some "unknowns". Will be interesting to see if any end up on the roster 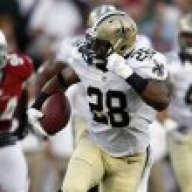 Offline
tracy would be good if he can just stay healthy

Online
I don't care who we sign, as long as they produce. The defense needs to get their **** together and play good ball. Our window of opportunity is closing bc of our lack of defense. Frankly, my patience is wearing thin with the defensive side of the ball.
Show hidden low quality content