Offline
Bush was speaking about the rumor of a draft getting started.

The rumor was based on some preliminaries being done by the Selective Service to deal with the possibility of females having to register, due to changes in federal Equal Opportunity requirements.

The rumor about the draft got started in the Social Security Administration's internet. Yes, they have their own.

It spread to the the Department of Defense internets. Yes, they have several.

It then spread to the World Wide Web, which most people now call "The Internet."

So, you see, the rumors did get started on "the internets," but civilians who are unaware of the government "internets" thought Bush misspoke.

He didn't. The rumor started on the SSA's internet, spread to the DoD's internets and from there to the World Wide Web A.K.A. the Internet.

Glad we could clear that up.

Of course, President Bush gets Google bombed a lot, thanks to that vast left-wing conspiracy. In one well orchestrated prank, Web users entering the words "miserable failure" were directed to the official White House biography of the 43rd U.S. president. During the run-up to the Iraq war, a search of the infamous term "weapons of mass destruction" led to a page saying "Weapons of Mass Destruction cannot be displayed."

Now, the online community is having more fun at Bush's expense, linking to an excerpt of his interview with CNBC anchor Maria Bartiromo during which he plugged Google Earth in that inimitable down-home way that routinely subjects him to gigabytes of Internet ridicule of the Colbert roast variety.

Bartiromo: I'm curious, have you ever googled anybody? Do you use Google?

Bush: Occasionally. One of the things I've used on the Google is to pull up maps. It's very interesting to see. I've forgot the name of the program. But you get the satellite, and you can, like, I kinda like to look at the ranch. It remind me of where I wanna be sometimes. 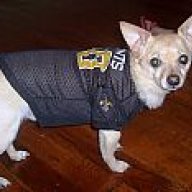 Offline
According to Merriam-Webster (probably a commie-pinko lib)

They must have forgotten to include the plural form?
http://www.m-w.com/cgi-bin/dictionary?va=Internet

SaintsFan11 said:
They must have forgotten to include the plural form?
http://www.m-w.com/cgi-bin/dictionary?va=Internet
Click to expand...

Offline
Not only that, but take THIS:

Before coming to Michigan, Bush was in Des Moines, Iowa, at lunchtime. He helped raise $400,000 for the state Republican Party and congressional candidate Jeff Lamberti.

The president mistakenly referred to Lamberti as "Dave" throughout his speech. :rofl:

Offline
At least he didn't call him Vince Lamberti.

Offline
Let's see, what do I believe......do I believe that the president misspoke, or that he's actually using the correct defense department nomenclature?

Based on what I know about this president's past butchering of the English language I'll take "the president misspoke" for a thousand, Alex.