Gotta talk the B word (1 Viewer)

When will it end?

Offline
How could he not mention it with both Brett and Kurt sitting there? Brett's never made a big deal about it anyway.
OP

billinms said:
How could he not mention it with both Brett and Kurt sitting there? Brett's never made a big deal about it anyway.
Click to expand...

The segment is coming up. 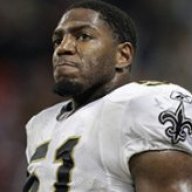 Offline
I rather hear from DeMaurice Smith...

Offline
He said you can't change the rules without changing the integrity of the game. Favre has always been a trooper.

Offline
Brett said basically the same thing he's always said. QBs always have a target on their chest, the main problem he has with that game is with the plays he didn't make. He also said the whole concussion thing being so big right now made the bounty thing blow up bigger than it should have.
OP

Offline
He's great. Unfortunately the league has done such a good job blurring the difference between pay for performance and pay to injure that those who haven't followed this as much as we have assume the worst of the Saints.

I hate Goodell. He said something in his presser yesterday that explains all that went on. He complained that the players(all players) didn't get the message about bounties at first, but now they do.

So to get the point across, he deliberately exaggerated the Saints conduct and imposed shocking penalties so that no one could forget. *******

This was on NFLN which is the league's mouthpiece. I hope the other networks are ready to move on. I know I am.
Show hidden low quality content