Grading the New Orleans Saints vs. the Carolina Panthers (1 Viewer) 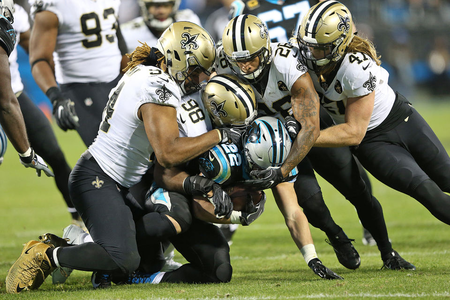 The New Orleans Saints improved to 12-2 with a gritty 12-9 win against the Carolina Panthers on Monday night at Bank of America Stadium in Charlotte, N.C.

Here are my position-by-position grades for the Saints in the hard-fought contest:

This was not a vintage Drew Brees performance, but the Carolina Panthers had a lot to do with it. Carolina employed a similar game plan to the one Dallas used three weeks ago and enjoyed similar success. They essentially played the Saints straight-up, using bracket coverage to limit Michael Thomas’ big plays and relying on talented Pro Bowl linebackers Luke Kuechley and Thomas Davis to shadow Alvin Kamara and hold him in check. This forced Brees to call on alternative options more often than not and the group of Dan Arnold, Keith Kirkwood, Tommylee Lewis and Tre’Quan Smith struggled to deliver. Brees’ 69.1 passer efficiency rating was a season low and his pick-2 interception on the two-point conversion was an uncharacteristically poor decision and could have come back to haunt the Saints. On the positive side: Taysom Hill had a nifty 17-yard run for a key first down late in the second half.