Grading the New Orleans Saints vs. the Philadelphia Eagles (1 Viewer) 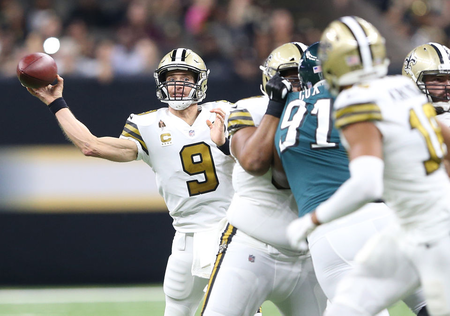 Drew Brees was magnificent again, dissecting the injury-riddled Eagles defense for 363 yards and four touchdowns, while completing 22 of 30 passes with no interceptions. With the Eagles bracketing receiver Michael Thomas and Alvin Kamara in coverage, Brees quickly adjusted to the strategy and reguarly dialed up secondary targets Tre'Quan Smith, Dan Arnold, Keith Kirkwood and Austin Carr. The result was a 153.2 passer efficiency rating, the fifth highest figure of Brees' 18-year career. Brees was always a step ahead of the Eagles' defense and masterfully checked into the right play with his pre-snap reads.

The Saints rushed for 173 yards, the most against the Eagles in more than two seasons. Mark Ingram and Alvin Kamara combined to average 6 yards a carry. Ingram enjoyed his second consecutive 100-yard game with 103 yards and two touchdowns on 16 carries. Kamara added 71 yards on 13 carries. Kamara made his one pass reception count, a 37-yard touchdown catch in single coverage against Malcolm Jenkins. ...