Grading the New Orleans Saints vs. the Pittsburgh Steelers (1 Viewer) 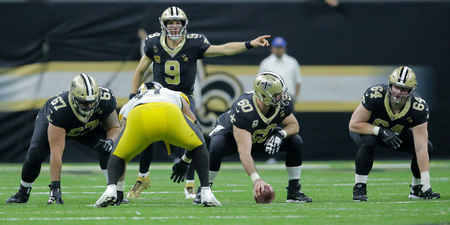 The New Orleans Saints defeated the Pittsburgh Steelers 31-28 on Sunday to clinch home-field advantage in the NFC playoffs.

A look at my position-by-position grades for each unit in the game:

Drew Brees was again at his best when the Saints needed him most, calmly executing the 2-minute offense for the game-winning touchdown pass to Michael Thomas. It was Brees' only touchdown pass of the game but his numbers reflected his efficiency: 27-36, 326 yards, 0 interceptions and a 103.2 passer rating. Brees' biggest play might have been his break-up of one of his own passes, which was tipped at the line of scrimmage in the third quarter and surely would have led to an interception. The Steelers pressured Brees throughout the game and he routinely bought time in the pocket to find receivers downfield with accurate strikes. The biggest demerit goes to backup Taysom Hill for his interception on the opening drive. Hill hasn't thrown many deep balls this season and he hung that one up in the air a little too long, giving safety Sean Davis time to backpedal and make the touchdown-saving pick.