Now this was completely uncalled for. Was the officer having roid rage? He had him cuffed he was not going anywhere. He should not work in law enforcement anymore.

Now this was completely uncalled for. Was the officer having roid rage? He had him cuffed he was not going anywhere. He should not work in law enforcement anymore.
Click to expand...

Nonsense. Clearly the criminal scum was not complying, the Officer felt his life was in danger, and had to kick him, then put his gun to the belligerent suspect's head.

... just to save some peeps some time

Offline
Here is the officer's mug shot. He looks like a roider 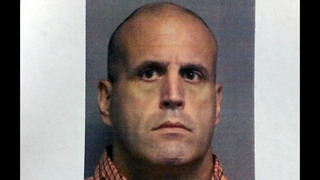 Offline
He lifts heavy things up and puts them down

You are more likely to get arrested in Gretna than any other large city or mid-sized town in the country, according to the website Fusion.

Citing an analysis of FBI statistics, the website says "the Gretna police department made 6,566 adult arrests in 2013, or a little more than one arrest for every three of Gretna's roughly 18,000 residents (although arrest data includes non-residents)."

That's about 14 times the rate of arrests in the typical American town, Fusion said.
Click to expand...

Holy ****. That really is frightening.

Offline
I posted that article a while back in one of the police threads. What's even more frightening is the overwhelming bulk of those arrests aren't for violent crime or even drug related. It's for basically petty revenue generating crap.

The number of arrests that Gretna makes could make you assume that Gretna is a dangerous place. In fact, the opposite is the case. In 2013, exactly 49 adult arrests by the Gretna police department were for the serious violent offenses of murder, rape, robbery, or aggravated assault. About a tenth of adult arrests, 652, were for drug violations, putting Gretna near the very top of the country in per-capita drug arrests. But the bulk of the arrests are even less consequential, with 948 arrests for drunkenness or disorderly conduct, and 4,258 arrests in the category of &#8220;other offenses,&#8221; not significant enough for the FBI to track.
Click to expand...

Offline
Gretna is the worst man. Only place I've ever been hassled. Said I looked "like I was up to something." Apparently the act of walking on the sidewalk, all alone, minding your damn business at 5 p.m. means you're up to something in Gretna. All I'm doing is walking right up the street to get a pizza, then I'm walking right back to my sister's house right over there.. I told them that and they were all "You shouldn't be walking out here" and then they followed me all the way to the Little Caesar's.
OP

Offline
I know people that have gotten speeding tickets for going over by 2 mph. I can see being ticketed if you went 5-10 mph over but 2 mph over? Gretna Police got nothing better to do?
Show hidden low quality content