From Feb. 13 to 15, the Romans celebrated the feast of Lupercalia. The men sacrificed a goat and a dog, then whipped women with the hides of the animals they had just slain.

The Roman romantics "were drunk. They were naked," says Noel Lenski, a historian at the University of Colorado at Boulder. Young women would actually line up for the men to hit them, Lenski says. They believed this would make them fertile.

The brutal fete included a matchmaking lottery, in which young men drew the names of women from a jar. The couple would then be, um, coupled up for the duration of the festival — or longer, if the match was right.
Click to expand...

Apparently, Valentine's used to be much more than just buying flowers or a card.

Online
is this not how everyone celebrates it?
have to say i'm a bit embarrassed now 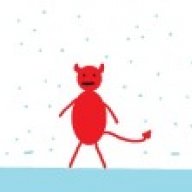 Offline
my girl and i don't do the slaughter part, but we do flog

ld_in_sc said:
my girl and i don't do the slaughter part, but we do flog
Click to expand...

clearly you're not married -no more team flogging

Anyone with any real-life experience?

Sorry, I don't flog and tell.

ld_in_sc said:
my girl and i don't do the slaughter part, but we do flog
Click to expand...

Offline
Hmmm.....Shirley Jackson could have made that story so much more fun.

oohhhh...you take the animal out of the hide?
that makes much more sense

Offline
Valentine tips from Nick Offerman. "You're going for a ride to the realm of coitus."