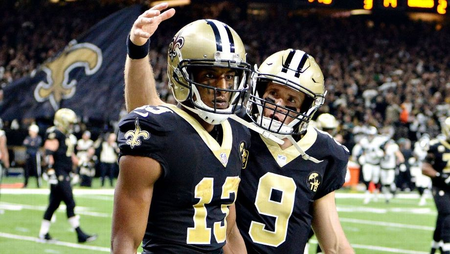 Michael Thomas, who led the NFL in receptions this season, had 12 catches for 171 yards Sunday as the Saints advanced to the NFC Championship Game. John David Mercer-USA TODAY Sports

NEW ORLEANS -- The drive had a little bit of everything. Most importantly, it had a lot of New Orleans Saints receiver Michael Thomas.

It took 18 plays, gained 92 yards and lasted 11 minutes, 29 seconds -- the longest postseason drive by any team in at least 20 years, according to ESPN Stats & Information research. It was the longest drive of any Saints game, regular or postseason, in that same time span.

In the end, Thomas’ 2-yard TD catch gave the top-seeded Saints their first lead of the game and allowed them to keep their Super Bowl hopes alive with a 20-14 victory over the Philadelphia Eagles in the divisional round of the NFC playoffs.

The Saints will host the NFC Championship Game for the second time in franchise history next Sunday against the No. 2-seeded Los Angeles Rams.

Sunday’s whole game was basically a survival for the Saints, who came out rusty after their first-round bye and immediately fell behind 14-0 thanks to an interception by Drew Brees on the first play of the game and two quick TD drives by the Eagles on their first two possessions. ...