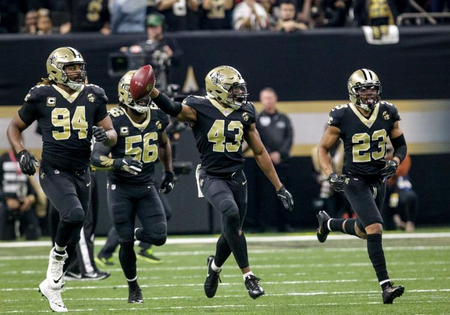 Earlier this year, completing a deep pass against New Orleans wasn’t much of a problem. Offenses attempted 26 passes that traveled 15 or more yards through the air, completing 18 (69 percent) for 451 yards and six touchdowns during the first four weeks of the year. It was almost an automatic play, on which there were many people to blame.

The defense has since settled down and almost completely flipped the narrative. In the games since then, the Saints have lowered the completion percentage on those passes to 44 percent. They’ve given up zero touchdowns and recorded six interceptions.

Much like the failures, there are many reasons for success. Marshon Lattimore finding the clamps that he first used to get a grip on and then hold his reputation as one of the league’s better cornerbacks as a rookie to get back on track after a rocky start to the season was critical.

Eli Apple coming in and settling the other cornerback spot has also been key. The coverage busts that populated the early part of the season rapidly dissipated as the cornerback got up to speed following a deadline trade with the Giants. ...