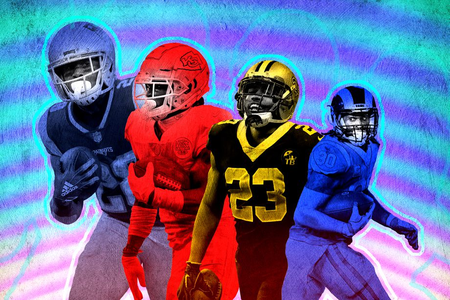 By Danny Kelly | the ringer

The smoke has settled from the NFL’s divisional round, revealing this year’s final four. In the AFC, the Chiefs took care of business and dispatched the Colts 31-13, moving to a championship-round matchup with the Patriots, who blew out the Chargers, 41-28. In the NFC, the Rams ran all over the Cowboys, 30-22, and the Saints came back from a 14-point deficit to beat the Eagles, 20-14. Put together, this weekend’s action sets up a championship round that features the four top-scoring teams in the NFL.

The divisional round delivered plenty of excitement, but a few moments stood out as more critical or illuminating than the rest. Here are a handful of the biggest game-changing plays from the weekend, along with what they can tell us about both the teams involved and the implications for the postseason picture.
Marshon Lattimore’s Second-Quarter Pick

The first quarter couldn’t have gone much worse for the Saints, who came out of their bye week looking rusty on both sides of the ball. The Eagles intercepted Drew Brees’s first pass, and Nick Foles promptly picked apart the New Orleans defense, finding Jordan Matthews on a 37-yard touchdown strike on the Eagles’ first drive. The Brees-led offense gained zero yards and went three-and-out on its second possession, precipitating another Philly touchdown drive, and when the Saints punted the ball back to the Eagles on their third possession—setting Philly up at their own 30-yard line with a 14-0 lead in the final seconds of the opening frame—it felt like New Orleans was about to let the game slip away from them. The Saints needed a stop in a bad way. Lattimore delivered. ...