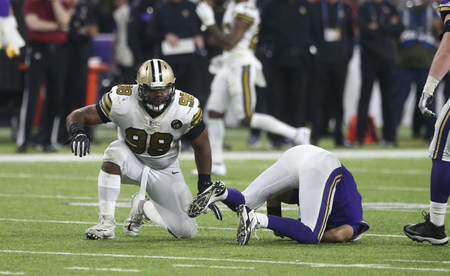 It looked like his spin move was going to be the most deadly weapon in Sheldon Rankins' arsenal.

He ripped it out with some frequency earlier in the season, finding success almost every single time he reached for it. It was deadly, but Rankins has been smart about how he uses it. Use it too often, and it loses effectiveness. So, it stays tucked away in case of an emergency.

Besides, it is starting to look like the deadliest weapon in Rankins’ arsenal might be his bull rush. It is deadly. It is overwhelming. It loos unstoppable. For a while, it was a New Orleans’ secret, but there is a growing list of 300-pound men who have been made to look like they were strapped backward to a zip line when going up against Rankins’ bull rush.

Jordan has been doing that. For two years now, he’s been going to bat for his teammate, trying to tell anyone who would listen how well Rankins was playing despite not having a lot of stats. Jordan often talked about how Rankins was setting him up for success and called his teammate the “mastermind of the defensive line” for all the ways he helped the group make adjustments. ...