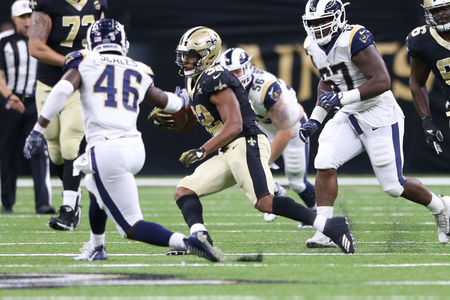 Just about all the players the New Orleans Saints cannot live without were safely tucked away on the sidelines by the time the opening kickoff signaled the start of the 2018 preseason finale.

Thursday (Aug. 30) belonged to everybody who still had something to prove, and plenty of Saints made a strong statement for why they belong in a 28-0 win against the Los Angeles Rams.

Nobody made a stronger case than veteran linebacker Nate Stupar, who recorded three sacks, a fumble recovery and an interception — in the second half alone.

Though Stupar’s clearest route to the team is still as a special teams contributor, a dominant night on defense certainly helps his cause. He finished his night with a team-high seven tackles to go along with his highlight-reel plays.

He was part of a defensive unit that played some spirited football with several players vying for what is likely to be only a few open roster spots. In shutting the Rams out, the Saints allowed just 151 total yards and forced four turnovers. ...