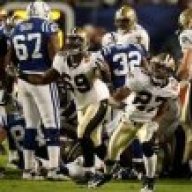 Offline
I have been watching the NFL (New Orleans Saints) closely for five years now, so I don't consider myself much of an expert, but I also like to think I know a few things. I have watched every snap Drew Brees has taken since being signed by the Saints and recently I have come to the conclusion that he is not only the best Quarterback in the NFL, he is the best player in the NFL.

I have also come to the conclusion that almost everyone outside of Saints Nation (can I call it that?) doesn't agree with me. I'm not even going to get into why he is better than everyone including Manning and Brady because I would like to think as knowledgeable Saints fans, you already know why.

In my brief and in-depth history with following the National Football League (from a far) I have become very familiar with two should I say famous phrases:
"A Quarterback in the National Football League is only as good as the Championships he has won"
and
"Defense wins Championships"
Now I ask you, Is it fair that Drew Brees, one of the best Quarterbacks ever, gets judged on how well his defense performs?
Show hidden low quality content