How to tackle Saints’ Alvin Kamara? Redskins are still trying to figure that out. (1 Viewer) 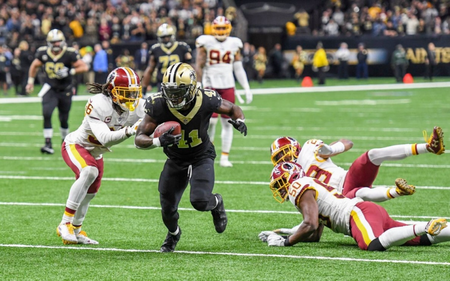 Saints running back Alvin Kamara, shown running through the Redskins' defense last year,
has been impossible for teams to tackle this year. (Jonathan Newton/The Washington Post)

How do you tackle Alvin Kamara?

Redskins safety D.J. Swearinger shook his head late Thursday afternoon. From deep inside their practice facility, Washington’s defensive coaches and players have been watching tape of the running back from the New Orleans Saints who has been one of the league’s most electric players through the season’s first four weeks.

What they saw was a player who has become so adept as both a runner and receiver that opposing defenses seem flustered in trying to find ways to stop him. He has the third-most catches in the NFL (35) for 336 yards, while his 275 rushing yards are eighth in the league. His six rushing touchdowns are the most in the NFL this year. Elias Sports reports that he is the first player to have both 1,000 yards rushing and receiving through his career’s first 20 games.

A big reason for all of this is that Kamara is very hard to tackle.

“With most running backs if you come from the side and hit them you can knock them down,” Swearinger said. “But Kamara has such great balance that when you hit him he just kind of absorbs the blow.”