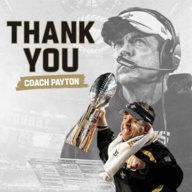 Offline
For years I have been going to the same pub towatch the Saints play on Sunday. They also run a pro-pickem game where the person with the most wins gets a $100 gift card. They also keep track of points for the season for a grand prize. They have all the games shown, it is a matter of which tv. Well, the past two years I have even gotten the management to put the Saints game on a certain tv consistently so I knew where to go sit. The perks of being a regular I guess. All my "bar friends" are fans of different teams. Mostly Bills fans. Lots of Jets and Giants. Huge Eagles and Steelers contingencies which have their own room! And scattered other teams. Two years ago someone was visiting a friend and was from NOLA so she was a Saints fan. That was it. I was basically the lone Saints fan. I wore a new jersey each year (yes I still have my Brooks one). Everyone in the bar asks me about them and thanks to sr.com I had the most up to date info.

And then there is now. I am no longer the only Saints fan. The second week of the season another fan came in with his jersey (it was #25). He saw me as I was wearing my #26. We introduced ourselves and now hang out on sundays if he comes in. Another day while I was waiting for the complimentary computer to check the internet (SR.com what else) a group of 3 or 4 came in saw me wearing my jersey (#68 Turley IIRC) and said "wow another saints fan. we are too." They sat in a different area of the bar. Right before kickoff last week another guy came in wearing a raggedy saints t-shirt. He sat next to me and we talked saints. He was from NOLA up until 4 or 5 years ago.

Well what is my point? I don't know if I really have one. It just seems odd that for years Saints fans were no where to be seen in my parts, even when we had a decent winning record. Now it appears Saints fans are either being created or are willing to leave their house wearing jerseys etc... Is this another example of the Bush factor?

Oh, I am in first place in the bar's pro-pickem game. The Grand Prize this year is SB tickets.

You can find me every Sunday in Rochester, NY at The Distillery on Mt. Hope Ave.

Offline
Nice story...good luck with the SB tickets. It's gonna be awesome to watch the Saints at their first one.:eclipsee_gold_cup:
Last edited: Nov 23, 2006

Offline
You are clearly starting a trend. You may have a career in fashion or trend spotting. Way to go!

Offline
we're about to find out if your new found friends are bandwagoners. Way to go on playing the role of 'anchor'.