Offline
wont surprise me one bit, becuase i think there the best losing team right now, no to's on both sides pitt wins.

Offline
On paper they are the better team but games aren't played on paper. They are losing because of turnovers and the thing causing those turnover are pressure on the QB and the opponents DB's making plays, which are two things our defense doesn't do well. If we can't get pressure on Roethlisberger, it will be a long day for our defense.

Offline
I hate to say it, but I believe we will lose this Sunday. 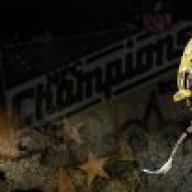 Yeti said:
I hate to say it, but I believe we will lose this Sunday.
Click to expand...

i got that feeling also

Offline
Well its inevitable that we are going to lose a few more games this season so it wouldn't shock me if we wouldn't win this Sunday.

Yeti said:
I hate to say it, but I believe we will lose this Sunday.
Click to expand...

SouthSaintsFan said:
i got that feeling also
Click to expand...

What you boys are feeling is constipation. The Saints will win by a significant margin. You won't believe your eyes when you see it. I know this because I have personally witnessed the unusual forces of nature that are aligning in our favor. So let it be written, so let it be done.

Offline
Would not surprise me either. If you have seen any of the Steelers games, you have to admit that they are probably better than there record. I know in the NFL you are what your record says you are but I think they are better than 2 wins. A little bad luck and a brutal schedule. Shows you the difference between the outhouse and the penthouse aint many steps at all.

Offline
you are what you think you are, at the time you are saying that you are ,that is why the saints will win sunday, because they know who they are, WINNERS. believe

Speck Killer said:
Would not surprise me either. If you have seen any of the Steelers games, you have to admit that they are probably better than there record. I know in the NFL you are what your record says you are but I think they are better than 2 wins. A little bad luck and a brutal schedule. Shows you the difference between the outhouse and the penthouse aint many steps at all.
Click to expand...

When a 2-6 "bad" team is that way because of poor coaching and turn overs, then you're a bad team - I don't care who you are, or how much talent you have.

Moreover, you're not giving any credit to the opponents that caused those turn overs. There are different levels of 2-6 bad teams (Pitt vs. the Radiers), but you're still a bad team, and you'll be home in January watching football, talent and all.

How many times have we said in the past, "we're better than our record?" We weren't, not until we corrected what made us that way.

Offline
Wow, what a bunch of negative posters.

Offline
Ya are you guys seriously saying we are probably going to lose. We are 6-2 for gosh sakes and we are playing together incredibly well. What has Pitt done. You guys are a sad excuse for Saints fans. WHo DAT!

Offline
Faith, folks. They've given the keys to their city to a bum quarterback simply because he didn't blow the Superbowl. You might remember another quarterback who was allowed to overstay his welcome due to perceived success? Look what he was able to do.

Offline
I have plenty of faith but would not be shocked if somehow we lost. Let's be honest, it is tough to win on the road in the NFL and I believe the Steelers are better than 2-6. I will also not be shocked if we whip them. A team like this is on shaky ground and if we can jump out on them quickly there fans will turn and they will lay it down.

Offline
Heinz Field is always a tough draw, but we went into historically-rich Browns Stadium and Lambeau Field and left both with victories, those both with a team much greener than the one we have now. This PIT team might be more talented than both of the aforementioned, but I still love our chances to leave Pittsburgh with another W under our belts.

This, and I have a bet running with a co-worker from Pittsburgh. So I better win. I'm not wearing jack with a Steelers logo on it.

Offline
All of the "we may lose" posts are bumming me out. I know this is part of the season where we have historically started going south, but this year is not part of that history.

We'll win, and all of the web-mouths posting their 'sports' articles will have to finally eat crow.
OP
OP

Offline
i'm one of hte biggest saints fan you will ever meet, but i'm just stating the truth if we turn th eball over and they dont we lose, plus its a have to win situation for pit and they are gonna pull out all the stops to try and get this win 11-5 or 10-6
Show hidden low quality content