In the middle of impeachment pomp, Steve Gleason gets his medal (1 Viewer) 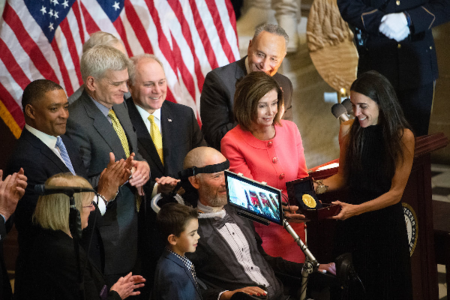 Steve Gleason got in just under the wire.

Impeachment mania is about to consume the Capitol again, and Wednesday was proof. Press conferences were held. Harsh words were spoken. Poetry was mangled.

But first, a former NFL player fighting a progressive neurodegenerative disease collected his Congressional Gold Medal, the highest honor awarded to civilians in the United States.

Some would call it bad luck that Gleason’s celebration in Statuary Hall fell on this particular day, when the “i”-word threatened to overshadow it. But if the onetime New Orleans Saints safety was bothered by the hubbub, he didn’t show it. He even got in a few digs at the lawmakers gathered to watch.

“Our greatest strength as a species has been our ability to bravely share our weaknesses and vulnerabilities with each other,” said Gleason, who has Lou Gehrig’s disease and uses a speech-generating device to communicate. “Sharing one’s weaknesses may not be common practice for some people, especially for politicians in an election year — wink wink.”