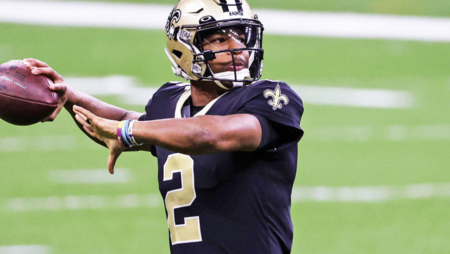 The quarterback carousel this offseason has already proven to be a wild one, as Matthew Stafford was sent from the Detroit Lions to the Los Angeles Rams, Carson Wentz was traded from the Philadelphia Eagles to the Indianapolis Colts and star signal-caller Deshaun Watson is still campaigning for a change of scenery. One interesting quarterback who is looking to grab one of the 32 starting positions is former No. 1 overall pick Jameis Winston.

Despite leading the NFL in passing yards and throwing for the second-most touchdowns in 2019, Winston's turnover struggles led the Tampa Bay Buccaneers to look elsewhere for a quarterback -- and it clearly worked out for them. Winston spent this past season as Drew Brees' backup with the New Orleans Saints. He played in just four regular-season games and completed 63.6 percent of his passes for a total of 75 yards. When Brees went down with an injury in the regular season, Saints head coach Sean Payton opted to go with Taysom Hill over Winston as the starter, and Hill went 3-1 in his first four career starts. This quarterback question is something the Saints will probably have to revisit again this offseason, as Brees is expected to retire. While Payton appears to have a serious level of respect for Hill, recent developments indicate it could actually be Winston who is the next signal-caller to take over New Orleans' offense.

Winston's second trip to free agency could end up being much more interesting than his first. Below, we will break down the top landing spots for Winston, size up his strengths and weaknesses and then list all of the news concerning Winston and his potential next gig. ...