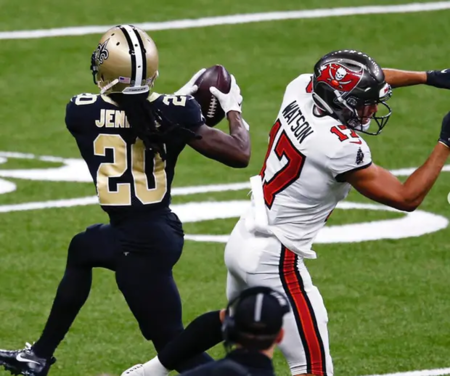 Janoris "Jackrabbit" Jenkins proved he is one of the best "Pick-Six Interceptors" in NFL history on Sunday against the Buccaneers. The Saints won 34-23 in a strange game from start to finish in Tom Brady's Buccaneers' debut. Brees and Brady were not incredibly sharp in the entire contest. But Jenkins and his fellow Saints cornerback, Marshon Lattimore, were.

After the game, Jenkins told reporters how he and Lattimore expected Brady to throw outside, thus setting up his 36-yard interception return.

“Well, we knew they hadn't ran it all game. And as we were watching film earlier during the week, we noticed that they like to run it. And me and Latt (Marshon Lattimore) was on the sideline talking to each other, telling each other what was going to come out in the second half. And in the second half of the first drive, that’s what they did, ran double out.” Janoris Jenkins, CB - Saints

As an NFL cornerback, Jenkins has excellent instincts and technique. Jenkins is in his ninth season as a pro. During his tenure with the then St. Louis Rams, New York Giants, and now New Orleans Saints, he has 24 interceptions. ...