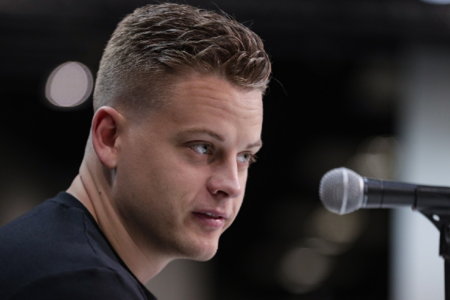 INDIANAPOLIS — Joe Burrow, the Heisman Trophy-winning quarterback from LSU, said Tuesday that he is willing to play for the Cincinnati Bengals if they select him with the top overall pick in the NFL draft.

“Yeah, I’m not gonna not play,” Burrow said during his meeting with reporters at the NFL scouting combine. “I’m a ballplayer. Whoever picks me, I’m gonna go show up.”

Burrow’s comments seemed to put to rest recent speculation that he might refuse to play for the Bengals and attempt to orchestrate a different beginning spot for his NFL career.

“The only thing that I’ve said is I just didn’t want to be presumptuous about the pick,” Burrow said. “And so that’s why I’ve been noncommittal because I don’t know what’s gonna happen. They might not pick me. They might fall in love with someone else. So you guys kind of took that narrative and ran with it. But there’s never been anything like that from my end.”