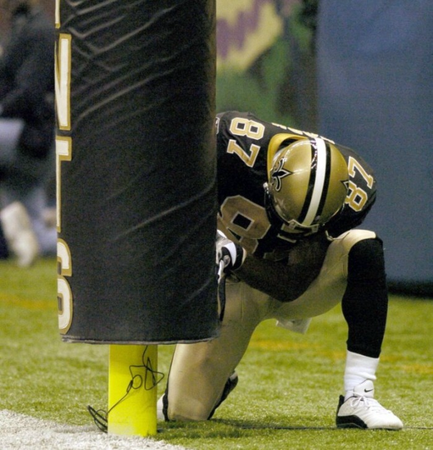 Saints wide receiver Joe Horn looks for the cell phone after he scores a touchdown against the New York Giants
in the Louisiana Superdome, Sunday, December 14, 2003. (Photo by Eliot Kamenitz, NOLA.com | The Times-Picayune)

Joe Horn said he was working out by himself at a gym in his hometown of Tupelo, Mississippi, when he saw Michael Thomas pay homage to his famous cellphone touchdown celebration Sunday (Nov. 4) against the Los Angeles Rams at the Mercedes-Benz Superdome.

When Horn saw Thomas cross the goal line on his 72-yard touchdown catch and race to the goal post in the south end zone to retrieve a cell phone he had hidden under the pad beneath the stanchion, he got emotional.

“When I saw him bring out that cellphone, I teared up,” Horn said. “That’s something that some kids don’t do, to pay homage to an old soul. For him to do it on a national stage took a lot of courage. I’m humbled.”

The choreographed celebration earned Thomas a 15-yard unsportsmanlike conduct penalty from the officials, as did Horn’s original act in the Saints’ 45-7 win against the New York Giants in 2003. It didn’t endear him to Saints head coach Sean Payton, but ultimately didn’t hurt the Saints, who held off the Rams for a 45-35 win. ...