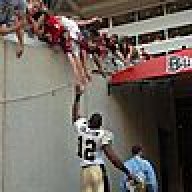 Offline
Has anyone heard mention of Joe Horns injury status/severity?

Offline
According to Kenny Wilkerson (WWL 870), last week Horn was making steady progress and was ready to play Sunday, but he "tweaked" his groin injury during last Friday's workout. He then had to sit out practice. According to Kenny, Payton's rule is that "if you can't practice by Friday, you don't play!"

Horn and Jammal Brown were not making any progress into Saturday and he told them both to stay home and get treatment.

Kenny stated that Joe could have played against the Bucs if he was needed, but Payton implemented his "Friday rule"; therefore Joe and Jammal stayed home.

Kenny mentioned yesterday that Joe should be ready to play this week and would address the issue on his radio show this Thursday night.

Hope that answers your question to some degree. We'll know more this evening after they practice today.

Offline
Just a guess but had this game been at home he would have played because Payton would have seen him Sat. Someone that called into WWL said he was golfing early Sun morning so I think he would have at least made a go at it.

Offline
Wilkerson said that Joe denies playing golf Sunday morning and welcomes the guy who called in and said that, to call Joe on his show so he can discuss it with him.

Offline
you tell them Joe!

by the way he shot a 73, I think the groin is fine

Offline
lol at dean. man that is some funny.

lgrank said:
lol at dean. man that is some funny.
Click to expand...

Yeah, cause everyone knows Joe has never shot below 80.

Offline
Joe will be aiight, Groin Injuries don't last long, Ice it for a a few days and streatch for a few days and your back to Normalcy probably in 4 days tops, if you do it properly.
Show hidden low quality content