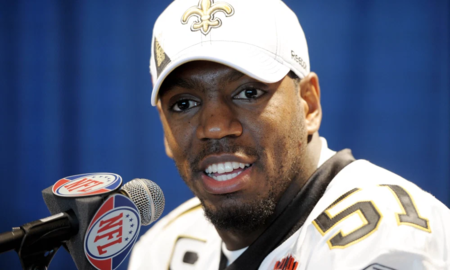 Here’s a name known well to many New Orleans Saints fans: Jonathan Vilma. The Super Bowl XLIV-winning linebacker will be in the FOX Sports broadcast booth for Week 4’s road game against the Detroit Lions, his first brush with the Saints since leaving ESPN’s college football coverage team earlier this year.

Vilma has been working as a color analyst, paired with longtime play-by-play man Kenny Albert in the booth and Shannon Spake reporting from the sidelines. He was on hand to see his old rival Atlanta Falcons choke another big lead for a loss in Week 3 (this time to the Chicago Bears, after losing in similar fashion to the Dallas Cowboys a week earlier) but did a great job keeping his composure.

Now he’ll get something of a reunion with the Saints. Vilma joined Jonathan Stinchcomb and sideline reporter Meghan Payton to cover the 2019 Saints preseason games, so this is a role he’s used to playing. He’s also remained close with Saints coach Sean Payton and some of his old teammates in the locker room over the years, so he’s as clued-in as anyone else could hope to be.