Just how absurd is the Saints offense? Here are 6 stats that you might not know (1 Viewer) 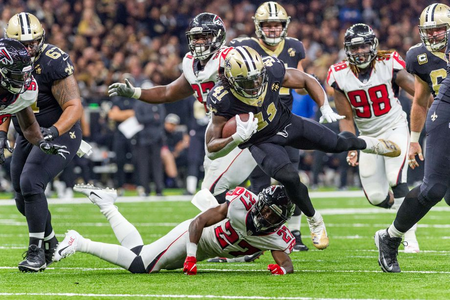 Drew Brees and company are sawing their way through NFL defenses.

The New Orleans Saints have been running roughshod through NFL defenses this season with arguably the most unstoppable offense in the NFL. Drew Brees is in line to receive his first ever MVP award, Alvin Kamara hasn’t experienced any sort of sophomore slump, and the Saints are scoring points at will.

The Chiefs and Rams may have played the best game ever on Monday night, but the Saints are the hottest team in the league right now. They’ve won 10 straight games, mainly through the use of their overwhelming offensive attack.

Anyone who watches the Saints can easily see they have a great offense, but it’s hard to see just how good they are with the naked eye. Here are six stats that show absurdly dominant the Saints offense is.
1. The Saints have given up sacks on just 2.9 percent of their dropbacks

New Orleans might have the best offensive line in the NFL. Ryan Ramcyzk and Terron Armstead are a rock solid duo at offensive tackle while Andrus Peat, Max Unger, and Larry Warford hold down the interior. That unit doesn’t allow rushers to get near Drew Brees and he’s rewarded them with a passing game that ranks first in adjusted net yards per attempt with a mark of 9.7. New Orleans has given up 11 sacks and has 363 attempts. The NFL average for sack percentage is 6.8 percent. ...