Sorry for lack of embed. On my tablet.
Click to expand...

livefromDC said:
Maybe read the whole thread before throwing your nickel in. MLU threw out the hypersensitive accusation at me first which is why I used it.
Click to expand...

Actually, I did. I just see a legitimate difference between the side of initiating criticism of a popcorn movie and someone defending the popcorn nature of it. But, I can see where others may see a distinction without a difference.

Looking at my post, I can see where it may have read like a harsh attack. That wasn't my intent -- notwithstanding the heat coming from MLU, it just seemed to me that if your end message was "agree to disagree' then maybe the ***-for-tat hypersensitivity retort was unnecessary.

You guys have enough heat going for the entire thread -- I'll retreat now with some popcorn and watch from my recliner from here on.

I don't think I saw anyone mention the Aquaman underwater scenes. I really liked how it looked.

Also, I was hoping to see the black Superman suit as well. I have a black Superman Under Armor shirt that I wear when I run. I understand he wouldn't have been wearing it when he was buried, but wish they could have come up with a way of getting it on him when they fought each other.

peglegpeet13 said:
I don't think I saw anyone mention the Aquaman underwater scenes. I really liked how it looked.

Also, I was hoping to see the black Superman suit as well. I have a black Superman Under Armor shirt that I wear when I run. I understand he wouldn't have been wearing it when he was buried, but wish they could have come up with a way of getting it on him when they fought each other.

Didn't the black suit have a certain amount of functionality in helping Supes return to life in the comic storyline? Like, it absorbed the sun's energy at a faster rate and helped him regenerate? I haven't read the story since it first came out, so I may be remembering incorrectly, but surely they could have worked the suit into the movie in that kind of capacity.

Offline
I'm putting a team together.... 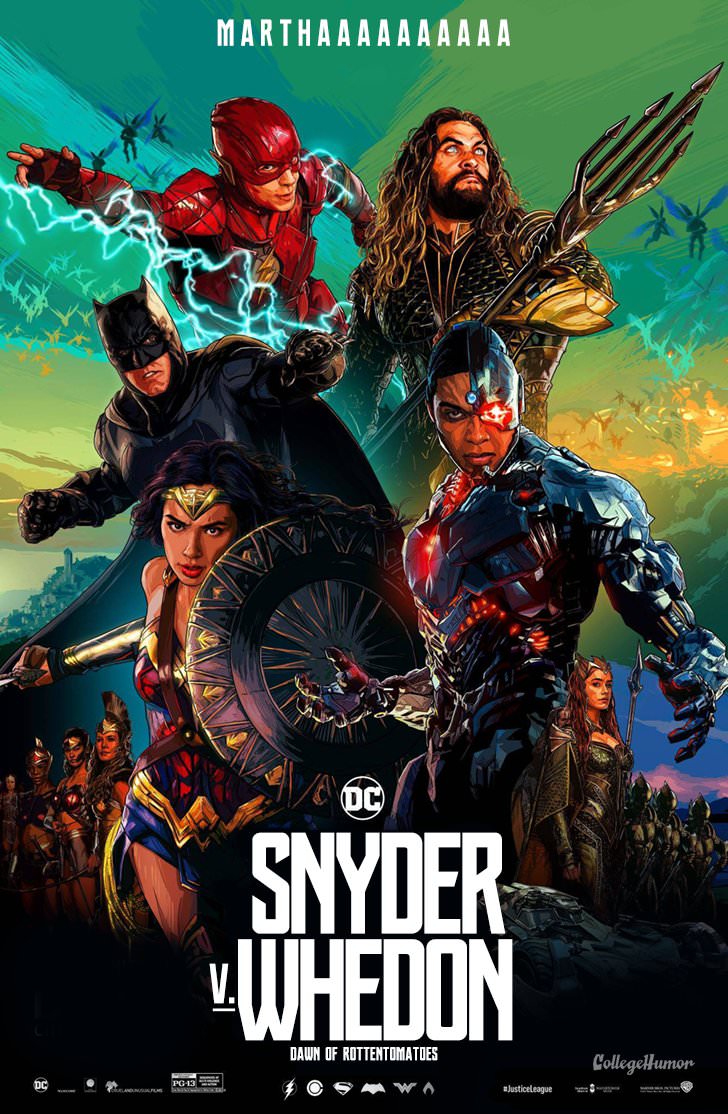 Offline
More about the turmoil behind the camera. Some of this we've already discussed...


“Justice League” had a lot of enemies: a looming corporate merger, a family tragedy, an internal clash between light and dark. But its greatest enemy was time.

Few people are happy with the finished project, which one insider called “a Frankenstein” made of the assembled parts favored by rotating executives and directors. But several people who spoke to TheWrap said the decision to keep the film’s Nov. 17 release date was a mistake — one as plain as Superman’s face.

Specifically, the weird, computer-generated look of his face — just one byproduct of the film’s rushed schedule. Here, according to insiders, is the story of how “Justice League” just ran out of time.
Click to expand...

Offline
Finally saw it. Many things I liked. Few things I didn't like. But overall I thought it was pretty fantastic and I will definitely see again.

The only thing that really, really, really bugged me is that at the end of BvS we see the dirt rising up from Supes grave so we know there's something going on with that. I would've much rather seen a more natural resurrection there, maybe involved the Kryptonian ship/Fortress helping with the revival on its own, or as some sort of failsafe directive from Jor-El, instead of them like, going in and digging him up and dumping him in all this gooey water. It just felt a little contrived.

So many jump off points for future movies though. Aquaman is already in the can and seems like everybody liked that character. Flash gives you the chance to do the whole Flashpoint thing. WW is pretty much a can't lose. Man of Steel 2 can explore that whole resurrection thing, and then you have the ring flying off during the big battle so there's your background for a new Green Lantern. Even the Cyborg stuff has some potential, especially if they do something with Brainiac since it seems like there must be a connection there.

Something on Kevin Smith's podcast resonated with me though, and I don't recall who exactly said it, but WB has treated these movies like people will just be thrilled with Supes/Batman/WW being on the big screen and just being there is enough for most casual people. The finances kinda bear that out too, even at this point, it's not like 93 million is a "bad" opening, it's only bad relative to how much they spent on it because of all their inefficiencies. But yeah, the stories aren't as strong overall, and I say that as somebody who doesn't think the Marvel storylines/plots are all as great as they're made out to be.

Online
i thought it was a fun movie...a little disjointed at times but that's to be expected since they haven't really spent a lot of time on some of the characters

Ben Affleck is a terrible Bruce Wayne though

Offline
I like Affleck as Batman but he should have never been cast in the role. It should have gone to a younger actor, which I think would have made things gel more.

Online
i dunno, some of his dialogue in JL was a little cringe-worthy...i didn't mind him so much in BVS

Online
Current projections are that this won&#8217;t hit 700 million worldwide. I thought heads would roll after BvS under performed by about 500 million. Now JL is going to under perform by about the same.

WB is light 1 billion dollars between the two movies. If heads don&#8217;t roll there&#8217;s some kind of corporate malpractice happening.

Saint by the Bay said:
Current projections are that this won’t hit 700 million worldwide. I thought heads would roll after BvS under performed by about 500 million. Now JL is going to under perform by about the same.

WB is light 1 billion dollars between the two movies. If heads don’t roll there’s some kind of corporate malpractice happening.
Click to expand...

I guess Wonder Woman making more than expected helps a little, there.

Their other movies (Skull Island, etc.) did well also. Justice league was supposed to line the pockets more.