RiverRat said:
Looks like someone named Karen would hang this next to her eat pray love signs. I don’t think our FDL can get any better.
Click to expand...

I somehow missed this becoming a thing

My name is Karen. I would like to register a complaint.

My name has been everywhere on the Internet in recent weeks, with #Karen trending on Twitter, flooding TikTok and becoming the subject of social media memes. #AndThenKarenSnapped also became a viral trend, describing white women losing their tempers.

In the past several years, “Karen” has come to represent a certain archetype of middle-aged white female privilege — or the new n-word, depending on whom you ask. Yup, “Karen” is the new black.

A young Karen likely would have been the class snitch, tattling on her classmates to the teacher to get them in trouble.

Middle-aged Karen is the one asking to see your manager. And a Karen at the peak of her powers will call the police on someone for a mild inconvenience........... 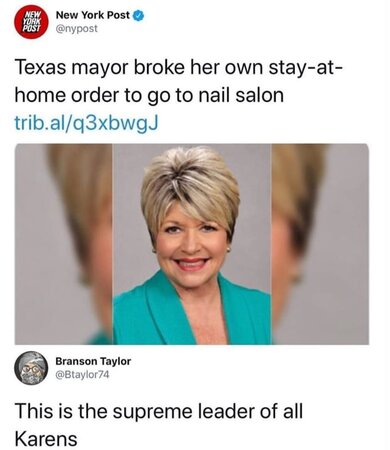 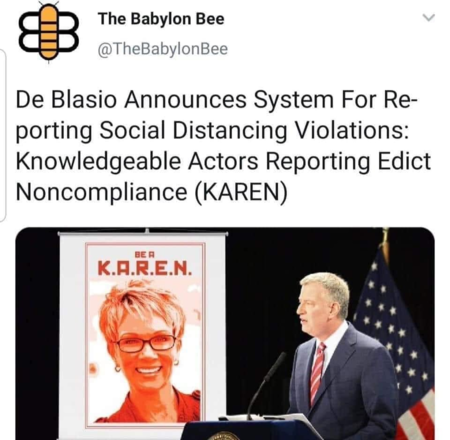 Offline
so it's not enough to be a Karen, she needs to be a Debbie Downer too? 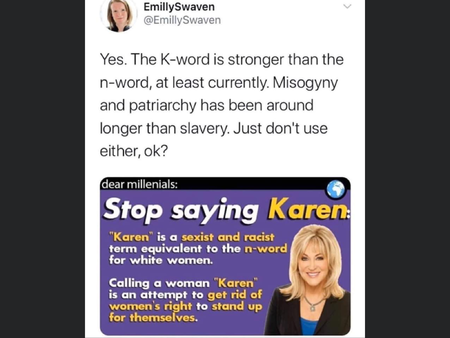 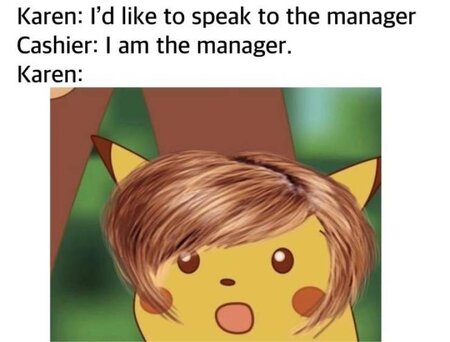 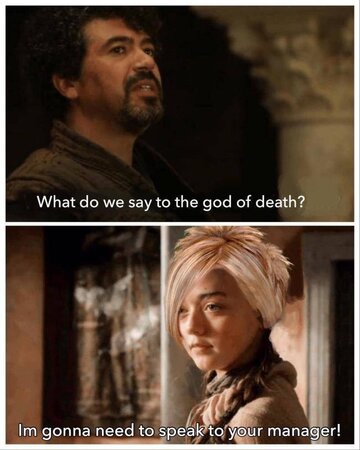 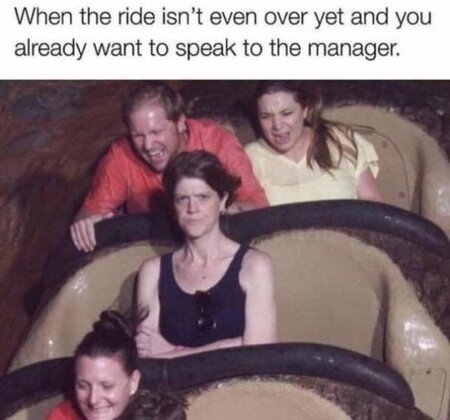 guidomerkinsrules said:
so it's not enough to be a Karen, she needs to be a Debbie Downer too?
Click to expand...

I'm gonna have to see your manager now, guido.

White women's just need to get the fork over themselves, said this white woman.

By the way, I call my sister Karen all the time. Because that's her name? (No. But it is) but she embodies all that is a Karen and may, in fact, be the prototype.

Okay, this is a Karen type; but, really, that hairstyle is all Kate Gosselin and she is in a class by herself.

It's a gimmick account, but I have no doubt that there are Karens out there that believe this.

Offline
Can a Karen also be an Ok Boomer?

gboudx said:
Can a Karen also be an Ok Boomer?
Click to expand...

Absolutely. It's the intersection of two of the best memes of all time.
OP

Offline
When did this "Karen" thing start?

Why not Cathy? Or Debbie? Or Julie?

Optimus Prime said:
When did this "Karen" thing start?

Why not Cathy? Or Debbie? Or Julie?
Click to expand...

chad and brad needed someone to doubleteam

Optimus Prime said:
When did this "Karen" thing start?

Why not Cathy? Or Debbie? Or Julie?
Click to expand...

I'm not gonna say we started it, but we know 2 women named Karen that fit the memes like an entitled, middle-aged, white glove.
Show hidden low quality content