Offline
everybody worried about Lewis playing zone in the Steelers 3-4 don't be..

"Rare height for the position. … Aggressive at the line of scrimmage. … At his best in press coverage where he can get his long arms on the receiver and disrupt the timing of the passing game. … Good foot quickness to turn and run with the receiver. … Plants, drives and closes quickly. … Gets his hands on lot of passes. … Has the experience and intelligence to operate well in zone coverage. … Enjoyed a solid week of practice at the Senior Bowl.
Keenan Lewis, Oregon State, NFL Draft - CBSSports.com - NFLDraftScout.com

Here is another nugget...

And while he loved his days at Oregon State, Lewis said he hopes his professional playing career will prove less geographically challenging for his family and friends. "I definitely hope that one day I'll be able to come back and play for New Orleans," said Lewis, who interviewed with Saints scouts at the NFL Combine. "I hope they bring me home."

Offline
great find....this guy is going to definitely sign with us. write it down. He's dreamed of being a Saint. 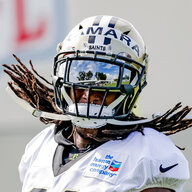 Offline
He definitely makes perfect sense for this team and its MO.

Offline
I really like his size at 6 foot and 208 lbs; can play physical and run with WR. Only 26 and smart. A football player and a Steeler (swagger).

Offline
We will probably play press on the boundary side....off man on blitzes so corners can jump routes. Which i think Prob is good@.

Prob has very short arms for his height...so when pressing if his technique is off and he lunges and misses its hard for him to recover....contrary to people saying hes good in press...i stick by my guns and say hes better@off man.

Offline
Pair Lewis with Corey White and you have some BIG corners.

Offline
I remember him pressing everybody at the senior bowl

Offline
I really don't see the Saints playing alot of press man. We are going to see tons more off man coverages with Rob Ryan calling the defense. So we need players with great recognition, great closing speed, and great tackling ability.

Offline
Seems as if the Steelers have a better appreciation for local talent than the Saints do. Mike Wallace, Keenan Allen and Ike Taylor come quickly to mind.

Offline
He'd be a great pickup!

Offline
I wonder how the meeting went or is going between Lewis and the Saints? This is another bad thing to come from the bounty crap; very little info to the media. Not saying I'm entitled to know, just saying it would be good to know.

Offline
Lewis is a one of the most well rounded DBs around. Been watching him over the last 3 years, and everytime he's in the game, he competes tooth and nail with his guy. I honestly think that he'san Asante Samuel type, who tackles and D's the run like a S. This guy's been under the radar cause he was on a team that sported Polomalu, Harrison, and that LB corps. Landing Keenan Lewis would be mega for us.

ELLIASJWILLIAMS said:
We will probably play press on the boundary side....off man on blitzes so corners can jump routes. Which i think Prob is good@.

Prob has very short arms for his height...so when pressing if his technique is off and he lunges and misses its hard for him to recover....contrary to people saying hes good in press...i stick by my guns and say hes better@off man.
Click to expand...