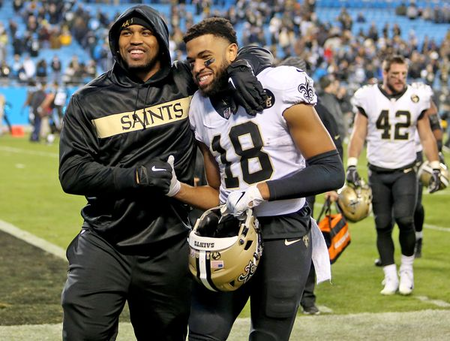 New Orleans Saints rookie wide receiver Keith Kirkwood has not had off-the-charts production in his first six NFL games, but the timing of his catches indicate just how much quarterback Drew Brees trusts him.

Of Kirkwood’s 11 catches this season, eight have produced first downs and six have resulted in third-down conversions, including both of his touchdowns. If Kirkwood’s clutch ability wasn’t apparent in his first five games, it became clearer in last Monday’s win over the Panthers as he had catches of 21 yards and 19 yards that converted a third-and-5 and a third-and-14, respectively.

“I kind of knew my role coming into the NFL from college,” Kirkwood said Wednesday (Dec. 19). “I was more of a third-down type threat in college as well. I’m not a big shifty guy, I’m not a guy who could make a person miss pretty easily, but I’m more of a possession receiver who could make plays at the right time and beat my man in one-on-one coverage.”

The Saints have lacked consistent production from their receivers aside from Michael Thomas, but Kirkwood has quickly proven to have a rapport with Brees since being activated from the practice squad in Week 10. ...