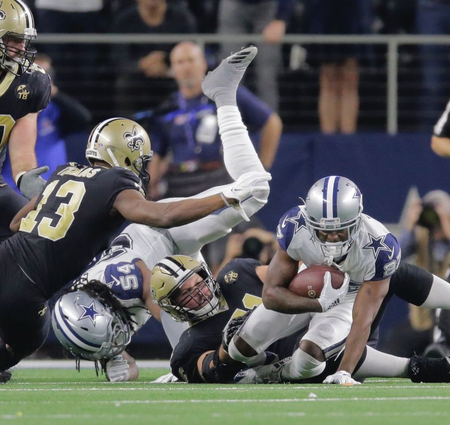 Dallas Cowboys cornerback Jourdan Lewis holds the ball after his interception of a pass against the New Orleans Saints
at AT&T Stadium in Arlington, Texas, Thursday, Nov. 29, 2018. (Photo by David Grunfeld, NOLA.com | The Times-Picayune)

ARLINGTON, Texas — The New Orleans Saints put themselves in position to steal a win on the road when defensive end Cam Jordan did what great players do and made a huge defensive play at the most critical moment of the game.

It was Jordan who breathed life into the Saints when he wheeled around the edge, stripped Dak Prescott and recovered a fumble deep in Saints territory with less than three minutes to go in the game. It was one of those plays the Saints have been making a lot lately, the kind that take points away from their opponent and potentially lead to points for the Saints.

Thursday was not one of those days, though, and it was not from the start. Two plays after Jordan’s heroics that prevented the Cowboys from taking a potential two-score lead on the Saints, an errant Drew Brees pass was intercepted by Cowboys defensive back Jourdan Lewis.

New Orleans would never touch the ball again, as the Cowboys kneeled out the clock from the Saints 1-yard line, ending the Saints win streak at 10 games with a 13-10 defeat. ...