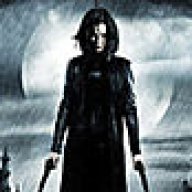 Offline
OK, go with me here. We are all throwing around draft pics and free agent signings right now so let's take a close look at the roster and see what makes sense and what doesn't.

QB: Brees- Obviously the man for years to come.
Martin- Free agent and no spring chicken. Unsure about this one because he has/and would resign for a very manageable amount. Knows the system and I can't see them paying large money for a top tier backup such as Gray from Jax. My thinking is one or 2 yr resign unless Payton thinks he has his man in Palko.
Palko- Is he far enough along to assume the 2nd spot? If so, late round QB pick or undrafted rookie in the same way he picked him up last year.

Summary: Could go a couple of ways here but don't see much action in free agency or draft for this position.

RB: McAllister- Here is the wildcard. Health? Ability? Money? Lot's of questions here. I don't see him back without a restructure. Too many questions. Healthy Deuce though and we are fine.
Bush- Hope he is serious to his new approach. Still don't think he can carry the load but I see his best year to date coming this season.
Thomas- Diamond in the rough or what? Showed enough and will have increased roll this year. Ready to carry the load? Not sure.
Stecker- Another touch one. So versatile. But not irreplacable. I say 50/50 on his return.

Summary: All hinges on Deuce and some on the Stecker resigning. Deuce back and I don't see much happening. Him gone or ANY questions and either they are comfortable enough with resigning Stecker and splitting with Thomas or you would look for a servicable backup/platoon mate. I could see someone like Foster, Dayne, or someone and they would have to look for a RB in the draft. Forte mid round or possibly someone in 1st or 2nd like it or not.

FB: Karney- No probs here but not getting any younger. One guy sticks out to me. Owen Schmitt from West Virginia. Karney or not this guy is a football player. Mean, can block, runs like a RB and catches well also.

WR: Colston- Extend him now.
Henderson- Had his chances but needs to move on.\
Meacham- We can only hope.
Patton- I see him back. Rejuvinated his career and wouldn't break the back. Great 3rd-4th option on the field.
Copper- Could see him back too for insurance and you can never have enough special teams players.
Moore- Great hands but has a lot to learn.

Summary: Need a 2-3 guy in case Meacham busts. I see one free agent signing. I like about 4 guys in this group depending on what they want. possession, speed or dual threat for returns. Ernest Wilford, Andre Davis, DJ Hackett, and Bryant Johnson. I also see a WR taken middle rounds.

TE: Johnson- My opinion, GONE
Miller- Resigned. Servicable guy and will want to stay since Payton gave him his shot to get back in the league.
Campbell- Back.
Ghent- Here is a curious one. They carried the guy all season on the active roster with 4 TE-s on the roster. You don't do that unless you think he may be the future and don't want him on the PS so someone can sign him.

Summary: Ghent, Campbell and Miller together are serviceable. How high do they feel about this? That's the question. Crumpler, Putzier? Or draft? Or do they think their good?

OL: Brown- Enough said although I still think his best position is RT.
Nesbitt- Average at best and is gone.
Faine- Revived his career here. If they want him, he stays and (I think he will)
Evans- Extend him.
Stinch- I think he only signed for 2 yrs last year so this is a contract year. IF they thought he was the long term answer here, why not loonger? I think this is his last year or he is gone prior to the season. Very replaceable.

Backups. This is ONE area I think the Saints have done an OUTSTANDING job through the draft the last couple of years. Strief, Alleman, Bushrod, and throw in Goodwin. Set here BUT I see Goodwin resigned and possibly replacing Nesbitt with Alleman swinging on the guard rotation. I could see Strief or Bushrod replacing Stinch. I can't see much play here in free agency. I mean WHY? I DO however see another 1-2 OL draft pics. Also, and I know no one wants to hear it, but if Clady REALLY is that good AND he is the best on the board at #10, look for it and at that point you could see a line shuffle with Brown back to RT.

Hope this gives ya'll something to read. I'll do defense soon. If this is just broing or too long and you don't want me to do another just let me know. 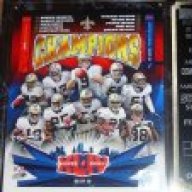 Offline
I'm like everyone else. I'd love to draft a #1 CB. I'd even love to see one of those two top DTs drop to us.

But I won't be shocked if we pick an OT. I really believe it would help our running game and give "Mr. Untouchable" Brees even more time in the pocket.

Most of all: I'd like to see us draft well in the first 2 rounds. When's the last time we have done that? 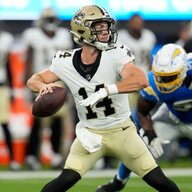 Offline
The people that we resign we will resign for a reason, so I won't be to judgmental, its the players we aquire that I'm most concerned about...well not concerned, I'm actually just anxious to see who we go after because they admit were we need to improve, I'm sure we will draft some offensive help because spots there need to improve also, cause we need to run the ball and protect our investments in the back field (Brees and Bush)

Offline
For several reasons, an excellent analysis. And for the most part, I am in agreement.

I do think the Saints need to draft in the middle rounds a big running back. Deuce, even if he has a productive 2008, has limited years remaining. And though like everyone else I am pulling for Thomas, we saw him play full-time in only one game, and I do not think Reggie can carry the load at running back (though he remains an extraordinary weapon and enhances our offense in so many ways).

I question whether we have a quality backup quarterback on the team, and a quality tight end would make our offense much more potent. Don't be surprised to see us draft a tight end in rounds 2-4, probably the third round.

Regarding the offensive line, I hope we resign Goodwin, and I totally agree that Clady at 10 is a possibility.

Offline
I agree that Brown is the best RT in the league. However, he will have to stay at LT for at least another year no matter who we draft.

As for the rest of Free Agency. I doubt we will go after Briggs if we get Thomas. So I'd like to see us pickup Crumpler. He's light years better than anyone we have. I'd also like to see us get D. Hall but I don't think it's in the cards.

Offline
It is indeed a fine analysis. If Nesbit walks, I hope Alleman (or maybe a drafted player) is ready to step in. I like the OL depth as well. Maybe a viable backup QB will surface. Likewise, TE could be improved. As we all know, it's the defense that is the real issue. Fixing the offense is a matter of tweaking.

Offline
I think drafting a TE in round 3 ([SIZE=-1]Jermichael Finley)[/SIZE]. and a 4th 5th or 6th round WR (Dexter Jackson) would do a lot for our offense.

Offline
I think they go with Palko at backup and bring in another young guy through draft, FA, UDFA, to challenge him. The idea may be that Brees has been pretty durable through his career and if he does go down for any length of time their will be a vet sitting at home they can bring in.

Martin does not cost a whole lot but I think they have to start letting Palko get some time at backup.
Show hidden low quality content