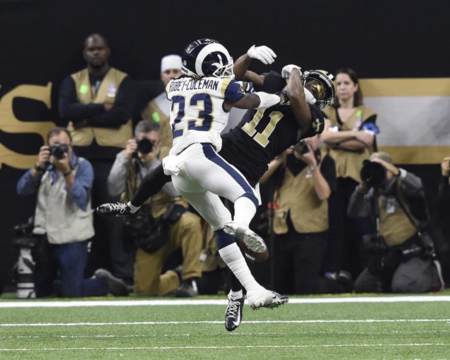 A federal judge in New Orleans on Thursday tossed out a lawsuit filed by a pair of Saints ticket-holders over the infamous “no call” that cost the Saints a trip to the Super Bowl, ending a long-shot gambit by embittered fans hoping to resurrect the team's championship hopes.

U.S. District Judge Susie Morgan rejected the ticket-holders' pursuit of a court order to force NFL Commissioner Roger Goodell to investigate the blown call in the NFC title game and then make a decision on whether to rewind the game clock.

The plaintiffs in the case, Tommy Badeaux and Candis Lambert, claimed that, under an arcane NFL rule, Goodell was obligated to take action on the refereeing snafu that unfolded to the horror of Saints fans in the waning minutes of the Jan. 20 title game. Goodell and NFL lawyers have said the rule they cited doesn't apply to the scenario.

But Morgan wasn't buying it. In her 17-page ruling, she found that Saints ticket-holders and fans have no right to compel the NFL or Goodell to do anything. ...