Offline
Lord, this is THE game. This is the defining game of the new regime. It all starts or ends in Pittsburg.

The New Orleans Saints have been in the NFL for four decades. Most of that time has been an exercise in futility. You, of course, already know this. The thing I want to focus on is how the lingering affects of years of inept ownership eventually created the current and most significant impediment to the team’s success. I’m talking about the great boogyman: A defeatist attitude. Doubt.

No game could possibly illustrate this more clearly than this week’s Saints vs. Steelers. In this game two extremes are meeting. It’s a collision of the collective consciousness of different cultures and traditions.

Saints fans are taken aback by the fact that the Steelers are the favorites to win. The Steelers are a 2-6 team with major questions at key positions, including a quarterback too dumb to wear a helmet on a freaking motorcycle. Sorry if that sounds a little harsh. I’m in no mood to tiptoe around the obvious.

So why is a 2-6 team favored over a 6-2 team? There are several reasons, but the biggest reason is clearly the 300 lb. gorilla in the room — the great boogyman.

Forget all that stuff you are hearing about the Saints being the new “America’s team.” It’s simply not true. It’s a media creation. It’s a stretch to find a story of interest. It’s PC, and all that bull dooky. The line on this week’s game proof negative. Sure, many people around the country are pulling for us, but the vast majority of America wants to be associated with a winner. That’s how Dallas became “America’s team.” That’s how Notre Dame became, well, Notre Dame.

Just as other regions around the nation scoffed at the re-alignment, condescendingly referring to the NFC South as the “Nascar division,” the Saints will never be “America’s team” until they earn it on the field.

Enough of that. Let’s go to the power of expectations.

Pittsburg is actually the second most popular team in the United States. No other team has the equivalent of Steelers bars in every major city. I was actually quite shocked and intimidated the last time the Steelers played the Saints and I entered a sports pub here in Washington, D.C. to see the game. It was packed with rowdy black and gold. Not my black and gold, their black and gold.

In order for the new regime Saints to have any hope whatsoever in turning the franchise around to the positive, they don’t have to beat the Steelers. They have to beat the boogyman. They have to do it now.
All the experts are calling this game a “trap” for the Saints. That is just psychobabble for not wanting their little world shaken too much. They really don’t want another “America’s team,” but I say let’s give it to them anyway.

Offline
Every game now is THE game. Atlanta and Philly were hugely important at the time in defining this team. If we start losing now, all we'll hear is same ole Saints.
OP
OP

billinms said:
Every game now is THE game. Atlanta and Philly were hugely important at the time in defining this team. If we start losing now, all we'll hear is same ole Saints.
Click to expand...

I would say it applies to Philly much more than Atlanta.

The fact that the number one team in our division is picked to lose to the last place team in another division is very revealling of how the nation truly views us.

I truly believe that this game is the most pivotal in determining how much buy-in the players have.

Offline
You are reading way too much into this game. The Steelers with all their guarantees are clearly desperate for a win. This is just another tough game for the Saints. The Steelers are the one's who've made this their season. According to weather reports it's going to rain, which means a muddy, sloppy game that should favor Willie Parker (averages 119 yds. at home) and the Steelers OL. Willie Parker isn't coning off major knee surgery unlike Deuce. As long as the Saints don't come out and lay an egg (Ravens game) they should be fine, win or lose. If this game were in the Dome things would be different but everything right now favors the Steelers. So if they do lose it's way too early to hit the panic button or say this is some kind of "defining" game......

Offline
Pete, while I don't necessarily agree with your post, I must say that you are a pretty good writer and your post is a very good read. I agree with Ti Rider though. This is not a panic game for the Saints. We win, we're 7-2, if we don't, 6-3. We would still be in great shape heading back home for Cincy next weekend.
What I did like about your post and agreed with is America's perception of us included but not limited to Las Vegas. Like Adam Schein, I spit out my coffee when I saw that the Saints were getting +4 points this week. What I see in this game for the Saints to win will be simple: ball-control and no turn-overs on the road. We will have to play smart to win. Pittsburgh will look to mimic to the Ravens' gameplan but I think we are smart enough to guard against that poor performance coming off that bye week.
Yes, I would love for us to go up there and get the W, but I will not panic if we lose. It's just one game out of eight more left. GO SAINTS! 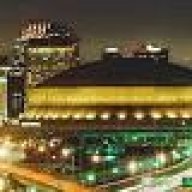 Ti Rider said:
You are reading way too much into this game. The Steelers with all their guarantees are clearly desperate for a win. This is just another tough game for the Saints. The Steelers are the one's who've made this their season. According to weather reports it's going to rain, which means a muddy, sloppy game that should favor Willie Parker (averages 119 yds. at home) and the Steelers OL. Willie Parker isn't coning off major knee surgery unlike Deuce. As long as the Saints don't come out and lay an egg (Ravens game) they should be fine, win or lose. If this game were in the Dome things would be different but everything right now favors the Steelers. So if they do lose it's way too early to hit the panic button or say this is some kind of "defining" game......
Click to expand...

an error free Pittsburgh team is still at least one of the top 10 teams in the NFL. If we win it will further cement us in the minds of people around the country as a bonafide contender. A close loss to the Steelers at home will have some of the same effect....especially if they play basically an error free game. At the end of the day we have to keep winning the rest of the season because if we don't...a convincing winn at PB will mean nothing.

Offline
I do believe this game is important because Pitts is pick to win and they are 2-6 which shows a lot of respect,if we want respect we must earn it by beating Pitt!

I think "it" has already started and "it" is a long way from ending. Pittsburgh is just Game #9, not a whole lot more or less.

Offline
The key to the game, as always, is playing error-free. The Saints' turnover ratio looks bad on paper, but a lot of the negative number stems from the dropped interceptions. Offensively, their efficiency has been amazing. I think that the stats are a bit deceiving and am less pessimistic than would normally be the case, given the stats.

Offline
We all know that the "respect" that we think we deserve from the media and/or experts is still a ways off. Right now, we're damned if we win or lose. If we win, all we did was beat a bad 2-6 Steeler team. If we lose, as said above, "same ol' Saints". I don't care if we're ever the favorites or get that "respect" as long as this team continues to play like it has. And sooner or later, the bandwagon will be full of everybody that doubted earlier.

It starts or ends in pittsburgh?? No way. I expect us to lose this game, but I also expect us to respond, keep improving, keep playing payton ball, and make the playoffs.

Pittsburgh is a desperate, extremely talented home team that not only won the superbowl last year but beat the Chiefs 45-7 only a few weeks ago. They really should've beaten the Falcons 2 weeks ago and would've beaten the Broncos if not for 6 turnovers. That would make them 4-4 right there.

The Saints are a team on the rise. We're not a finished product yet. A loss to the steelers under these circumstances won't derail this train.

Offline
Regular season games are important in thier relation to getting to the playoffs. this game is only important when it comes to helping maintain a lead in the division. The actual matchup is incredibly unimportant. A win helps a whole lot more than a loss hurts. This isn't an NFC south team we're playing, it isn't a NFC team, it isn't a team that is going to effect tiebreakers. So, outside of pundits views, this is the closest to a game that doesn't matter as it gets.
Still it is important to win, and it is important to the team to establish who they are. The saints are still developing a self image, and any win helps in that respect.
OP
OP

Offline
Man, it sounds like the boogyman has gotten you guys.

If we win this game, I'll be convinced that the team has really bought in to a new identity. I agree that this one game *should* not make any difference in the overall scheme of things, but I think it does symbolically. It's not that we are the underdog. It's why we are the underdog. This is the type of game where we traditionally get blown out of the water. If that doesn't happen this time, I will be walking on air.

Anyway, I didn't think anyone would agree with me. I just had to voice what I was feeling.

Well there you go Pete, you can rest your case.

saints_watcher said:
Well there you go Pete, you can rest your case.

Yep. Here's to hoping the players have a different mindset.

Offline
All great posts. The season is far from over if they lose, but Oh if they win, how sweet would it be? If the Saints can play the game turnover free, they have a great chance.
Show hidden low quality content