Man, the NFC confuses me (1 Viewer)

Dallas is very inconsistent, loses to WSH in a circus-like game, but win next two with one of those wins beating the current best team in the NFL

ATL starts off 3-0, and now they are on a 3 game losing streak (to mostly bad teams)

Carolina loses first 2, wins next 4, loses following 2, win their next 2 and are now on top of the NFC South.

STL starts off 4-2 and appear primed to be the NFC's surprise team. They then lose their next four.

The 49ers start 2-5 hoping for a good draft spot and then win 3 straight and could possibly make the playoffs.

Philly starts off 4-1, then lost four out of their next five.

Minnesota starts 4-2 then lose their next four.

Giants start off 1-2, Shockey/Coughlin appear to be feuding, they then go on a win streak but get blasted by Chicago.

All in all, the NFC is really confusing, and Chicago appears to be the only true great team in the conference.
Last edited: Nov 19, 2006

Offline
Parity reeling it's ugly head. There is no one team in the NFC that is head and shoulders above the others. Chicago has the better record because of their strong defense that can carry the load of a marginal quarterback.

If defense still wins championships you can expect to see a Chicago/Baltimore Super Bowl.

Offline
Thats the wild and wacky Nfl for ya

Thats the wild and wacky Nfl for ya
Click to expand...

They have a name for something similar in Nascar. I think at this point in the NFC, we would also call this Silly Season. 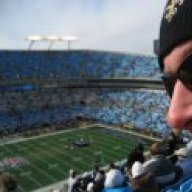 Offline
Yeah, it's been a crazy season. It's been really hard to pick the games straight up. As for the Bears offense, it really doesn't scare me at all. Their Defense, YES! But their Offense, NO WAY!

I think anybody can win the NFC.

Offline
Why not discuss the play of the team when we talk about the Big Picture in the NFC?.....

As of now, we play poorly!...yes, we lost the only BRIGHT SPOT on this team....M Colston, and it is crystal clear that we ain't playing good enough to be considered contenders!.....we make too many mental mistakes, and without Colston who cached EVERYTHING........it becomes plain that we don't have REALIABLE PLAYERS WHO ARE RELIABLE ENOUGH for us to mount any kind of pressure! (BTW, where did Horn dissapear after his TD catch?).....at this point is highly dubious that we can duplicate our good showing we had at the beginning of the season, so seeing this pathetic secondary in action as they get burned time and time again, makes me think we won't win more than 2 more games!........so an 8&8, or a 9&7 season looks like the most likely scenario, and unfortunately that won't be enough for the postseason!

Offline
I just wish it was the other way around.

Everyone knows that it's better to play your best football at the end of the season rather than at the beginning.

Bill said:
I just wish it was the other way around.

Everyone knows that it's better to play your best football at the end of the season rather than at the beginning.

I agree but we're lucky we got off to a good start because when you have a string of games like we've been having you don't lose that much ground. It seems like in today's NFL every team, even the great ones, will have a string of bad games.

Saintsphere said:
Dallas is very inconsistent, loses to WSH in a circus-like game, but win next two with one of those wins beating the current best team in the NFL
Click to expand...

I just have a feeling Dallas beats Indy today. I almost planning on putting money on Dallas, but change my mind at the last minute. Did anybody looked at the point spread, Indy was +1 or +2 favorite against Dallas?! Something has got to be up, seems way too easy money...looks like alot of people loss some money.
Show hidden low quality content