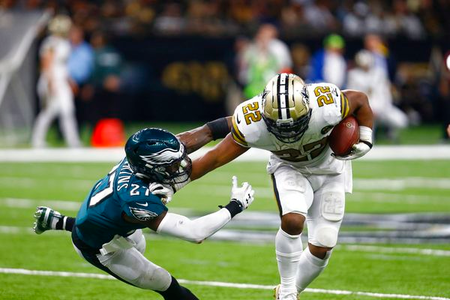 In his eight seasons with the New Orleans Saints, running back Mark Ingram has played on some of the NFL’s best offenses, including this season. So far in 2018, the Saints are the NFL’s top-scoring team and rank fourth in the league in yards gained.

Ingram has played on three teams that led the league in yards, including two that also placed second in the NFL in scoring -- New Orleans' 2011 and 2016 teams. While the 2016 team finished at 7-9, the 2011 squad posted a 13-3 record and set a franchise record with an average margin of victory of 13.0 points.

This year's team has an average margin of victory of 13.9 points and, after losing its season-opening game, has run off nine straight victories heading into Thursday night's game against the Atlanta Falcons.

“I was there for that -- so many yards, many points, many touchdowns," Ingram said of the 2011 Saints, his first NFL team. "But I just feel like the confidence this team has, the weapons, the foundation we have with our offensive line, (quarterback) Drew (Brees) is playing better than ever. We just have so many weapons, so many packages, so many different schemes that we can throw at you. ...