Offline
I fully expect Meachem to break the starting line up this up coming season and be a factor for our offense. I am just curious how everyone else feels.

Offline
So I'm not the only one that lays around at night thinking about Meachem?

Seriously though, I watched some more college film on Meachem yesterday and he looked good, so I see no reason why he wont get it done next year.

Offline
keep those avatars coming......
Meachem is such a mystery at this point.....when i saw him sprawling on the ground after that hit in the HOF game i have some reservations. I reviewed the hit several times and although it was a good one it was just alittle above average for the NFL. All that being said many of on the board have our hopes up that he is the real deal and we don't have to spend a draft choice on another WR. I was alittle to quick to judge him after the HOF game and i have since reconsidered and am hoping for the best. Being where i am i did'nt have many oppotunities to watch him play but others on this board have convinced me that the man has very good skills and am anxious to see him prove himself. Reading his comments to reporters over last season i think he is ready to do the same....Happy Mardi Gras to everyone...."the weather is here, i wish you we're beautiful"....J.Buffett

Offline
Yes i think he'll be good also! A upgrade over Hederson! Hey Skyebob you a parrot Head Too? I just hope he can catch!

Offline
He wasn't good enough/smart enough/healthy enough to even dress last year. I always have hope. I'm a Saints fan. But, let's just say I will be happily suprised if he contibutes next year.

Offline
I think with a couple of more years to memorize the playbook he could be a good as Devery Henderson.Oh and he has to have a good offseason resting his knee. *sarcasm*

Offline
no idea, he has never played a down in the nfl. guessing he has to be better than patten, henderson, cooper, and moore (no offense to patten). we got spoiled by payton's first year run, but the sad fact is we have several positions where it would not be hard to find a different person who could start and play at a MUCH higher level than our current starters. basically, if he is not better than the wr's I just mentioned, he was a terrible first round draft pick and not because we should have went defense.

Since he redshirted last year I am choosing to go on this scouting report...

Offline
I think he'll be a starter at least by mid-season.

Offline
Ask me again after the first week of TC......right now that question is impossible to answer. Unlike a lot of people here I think it's completely possible he could exit TC the starter opposite Colston.

Offline
Has Mike D. had any recent comments on Meachem?

Ti Rider said:
Ask me again after the first week of TC......right now that question is impossible to answer. Unlike a lot of people here I think it's completely possible he could exit TC the starter opposite Colston.
Click to expand...

Agreed, I think he will come out of camp either the #2 or #3 guy (at worst) I fully understand that the knee injury and the coming to camp outa shape may of held back his progression, but I also remeber reading an article that stated he wasnt fully healthy until week 6 or so of the season, its unfortunate he had the injury in camp, but it was also good because it was a pre-existing injury and it probably benefited him in the long run to just get fully healthy, I dont think it means he isnt a good player or wasnt worth the draft choice, I think it just meant that Saints fans were gonna be upset because there (our) first round draft pick wasnt gonna play (which lead to all the Meachem Sucks threads and the "when is Meachem gonna play" threads)


his talent will show this year, he will be worth the wait....wont tear up the league, but will show ability and potential.

Offline
The way his situation played out this year, I have a scary feeling he will be on the Cie Grant plan. He has seen he can live a very comfortable life without ever playing a down. His mission was to get a NFL contract not to be a great NFL receiver. 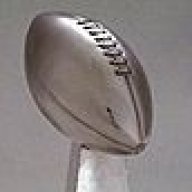 Offline
I used to think I was an optimist until I starting reading some of the posts on this board. I'm fascinated by people who have so much faith in a guy WHO HAS NEVER PLAYED A DOWN IN AN NFL GAME! I mean, hey, I hope he turns out to be a stud, but there's no reason to actually believe that will happen.

FWtex said:
The way his situation played out this year, I have a scary feeling he will be on the Cie Grant plan. He has seen he can live a very comfortable life without ever playing a down. His mission was to get a NFL contract not to be a great NFL receiver.
Click to expand...

Man are you serious? So basically he's done? He is gonna come to camp at 250pds, driving the new Bentley convertible with a bunch of girls in the car...cause like u said, his whole purpose was to sign an NFL Contract?!!


The guy isn't a "bad seed" or have "character issues" he had a pre existing knee injury that unfortunately got the best of him and he wasn't even healthy till mid season, all reports were he has made great strides since being declared fully healthy, while he has been sitting out, he has "probably" learned all 3 receiver spots and the playbook, so who's to say he won't have a good year next year, with all the practice time and rehab he has had?


Sure its easy to say "he hasn't played, so I don't expect nothing" but at the same time, its just as easy to say with all the time to heal and learn, that he will be more prepared to contribute next year and that he will make some impact in 08-09.
Show hidden low quality content