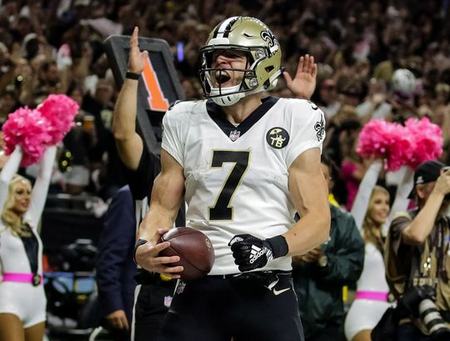 Items of interest as major rematches loom for the NFL's championship weekend:

X-factor: Taysom Hill. He’s the Saints’ not-so-secret, secret weapon. In a season when it’s been challenging for Drew Brees to rely on weapons in the passing game beyond Michael Thomas (125 catches) and Alvin Kamara (91), the third-string quarterback -- in a linebacker’s body (6-2, 220), with running back speed (4.4 in the 40) -- has been another type of force. Especially in short-yardage situations and on special teams. In the comeback win against Philadelphia, momentum shifted when Sean Payton called for a fake punt on fourth-and-one and Hill blasted through to keep alive what turned out as New Orleans’ first TD drive. On the season, he’s 3-for-3 in moving the chains off fake punts. Still, it’s weird to see Hill lining up at quarterback on occasion while Drew Brees lines up at receiver. Hey, the Ravens tried it for a while with Lamar Jackson and Joe Flacco. And Bill Belichick didn’t dare take the ball out of Tom Brady’s hands during that brief flirtation with Tim Tebow a few years ago. In any event, Payton, always on the cutting edge, has accepted the creative challenge of finding ways to get pop from the jack-of-all trades product out of BYU – albeit rarely as a passer (3 of 7, 36 yards, 0 TDs, 1 INT, 36.3 rating) and only barely as a receiver (2 receptions). It’s working. As a runner, Hill rushed 37 times for 196 yards during the regular season with 2 TDs – and converted a whopping 40.5% of his runs into first downs. ...