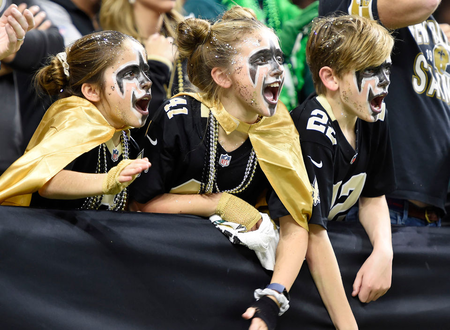 As rosters go, the 2018-2019 edition of the New Orleans Saints isn't without its idiosyncratic appellations. There's an Apple, a Banjo, a Bell, a Carr and a couple of Hills.

But while this year's playoff team might boast more pure talent than previous Saints squads, they've got nothing on past teams when it comes to memorable monikers.

With that in mind, and as the Saints fever runs high ahead of Sunday's NFC Championship Game between the black-and-gold and the Los Angeles Rams, we thought we'd sift through past rosters to develop an all-time New Orleans Saints All-Name Team. Because while their on-the-field talents often left something to be desired, the Saints of yesteryear boast some undeniable Hall-of-Famers when it comes to names.

Name: Happy Feller
College: Texas.
Years with Saints: 1972-1973.
Notes: Easily one of the all-time greatest names in NFL history, he was born James but got his nickname because he was such an easy-to-please kid. Unfortunately, there weren't too many happy fellers among the Saints faithful during his two years in New Orleans. In that time, he attempted 23 field goals. He made only 10 of them. (In his second season with the team, he went 4-for-12, with an 18-yarder being his longest kick of the season.) He was out of football the following year.
Honorable mention: Garo Yepremian. ...