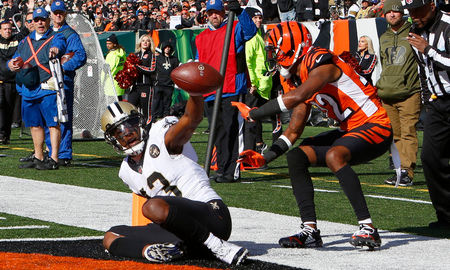 New Orleans Saints wide receiver Michael Thomas put himself on the NFL’s radar with 211 yards and a 72-yard game-winning touchdown over the Los Angeles Rams last week, but his latest record-breaking outing over the Cincinnati Bengals puts him on the same level as New York Giants superstar Odell Beckham Jr.

Beckham set the record for most receptions in a player’s first 40 games for the New York Giants with 266, breaking previous marks set by Hall of Famers Jerry Rice and Randy Moss. Thomas is now up to 273 and counting, with a minute and a half left in the third quarter.

Thomas is also coming off being named the NFC’s Offensive Player of the Week for his sky-high play against the Rams, with plenty of action ahead of him. ...