Michael Thomas kicks himself for uncharacteristic drop, jokes 'Taysom has a fastball' (1 Viewer) 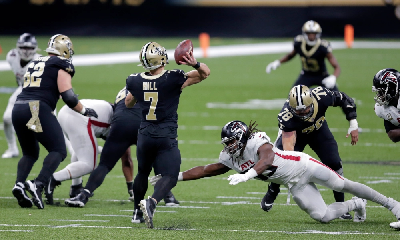 Michael Thomas showed New Orleans Saints fans something new on Sunday, and he’d take it back if he could. The reigning NFL Offensive Player of the Year let a well-placed pass from Taysom Hill slip right through his hands in their Week 11 win over the Atlanta Falcons, leaving the three-time Pro Bowler staring at his hands in disbelief after the ball hit the turf.

After the game, when asked about the missed connection, Thomas proved he remains his own worst critic.