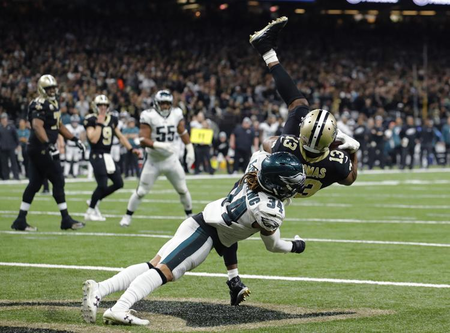 Thomas broke a pair of records held by former Saints star Marques Colston with his 12th catch of the day as the Saints were salting the clock away in the fourth quarter. The catch total bested Colston's mark of 11 catches for 140 yards in a loss to the Seattle Seahawks in 2014.

Thomas' 171 yards came as New Orleans fought its way out of a 14-0 hole and eventually took a 20-14 lead. His biggest play came on a 2-yard touchdown pass that gave the Saints a 20-14 lead in the third quarter.

He joined Mark Ingram, who also set a franchise playoff record, passing Reggie Bush and Pierre Thomas for the most rushing yards in the playoffs. ...