Michael Thomas On First Take: I’ll Be Back Next Week (1 Viewer) 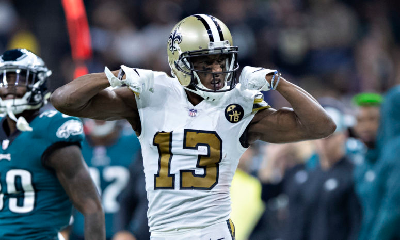 Michael Thomas has been out of action for the past four weeks due to a high ankle sprain. There have been plenty of rumors regarding his relationship with the franchise, but it appears all is well with the New Orleans Saints.

On Friday, Saints defensive end Cameron Jordan was on ESPN’s First Take to discuss the team’s mindset during the bye week. At one point during the interview, Thomas made a brief appearance to send a message to Stephen A. Smith.

“Tell Stephen A. Smith I’ll be back next week,” Thomas told Jordan before exiting the room.

Jordan then relayed the message to Smith, who responded with “That’s right. Handle your business, Michael Thomas.”