Micheal VIck is the Falcons version of??? (1 Viewer)

Offline
AAron Brooks. Yes you heard me right. Mickeal Vick's inconsistency will be the end of Mora's Carreer in Atlanta much like Brooks was Hassletts in New Orleans. Inconsistent play at QB from players with a world of talent but a real lack of leadership and abilitie to just know how to win, will cost Mora his job. Vick is not a rookie anymore and he has no more excuses. He is as good know as he is going to get. He can do some amazing things at times but one r two plays agame wont win you enough to keep you around. He still cannot manage to put more than one or two games together at a time where he lives up to potential.The Falcons go as Mike Vick goes and if he is off they have no real chance to win consistently. Thats just my opinion let me know if you think i am crazy.

Jim Mora is the new Jim Haslett. His team is completely undisciplined and he&#8217;s committed to a quarterback who&#8217;s wildly erratic. Sound familiar? Of course, this is the kind of game Haslett always won with the Saints. He was great on the road against good teams in spots everyone thought the Saints had no chance.


Vick will be spectacular. Falcons 23-16

Online
I'm totally with you on the Vick/Brooks comparison. While they're not carbon-copies by any means, both of them define the word "inconsistent." I really hope Atlanta continues the Michael Vick experiment because it's obvious to me that it won't work.

Offline
must be something in the family genes! 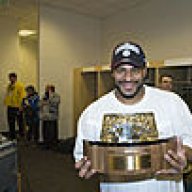 Offline
Even though Vick lit us up, he has never impressed me either...He reminds me of Kordell Stewart, and ya all know how that turned out for us STEELERS...

Offline
Isn't A. Brooks a cousin of M. Vick?

jackers said:
Isn't A. Brooks a cousin of M. Vick?
Click to expand...

(two posts before you)

must be something in the family genes!
Click to expand...

glad to see you read

Offline
Yes he is. Inconsistency runs in the family apparently.

Offline
People will probably disagree with me here, but he reminds me a lot of Kordell Stewart in his hayday.

Offline
Except that Kordell Stewart

Saint77 said:
People will probably disagree with me here, but he reminds me a lot of Kordell Stewart in his hayday.
Click to expand...

Exactly what I was going to say. People can knock Brooks all they want to, but unlike Vick he can actually make his reads and see a defense. Trying to execute a pathetic offense is what has hurt Brooks the most. Leadership? You try selling a bucket of hog swill to your teammates. It wont fly. Vick looks completely lost most of the time, and really only excells in the passing game when his mobility forces defenses to lose coverage. If I were Atlanta I would take Brooks and a decent OC over what they have at QB and OC now.

Offline
Second cousins and very much the same player: a ton of physical talent, but too many dumb mistakes and seemingly no capacity to learn. I've been saying for a couple of years now that the Roadkill will never get there as long Vick is their guy. It's a shame these guys never lived up to their physical talent or were able to learn from their mistakes, becuase it might have been a fun familial rivalry for several years if they could have been dominating players.
I always found it interesting that whenever they were asked wich of them they thought was the better player, they both would say that Marcus was better than either of them. It's a shame he turned out to be the biggest headcase of the three instead, so we'll never know if he had the goods, though judging by his career at VTech, he looked to be just another carbon copy of the same problems.

I'm glad we're past that now and have Brees leading this team. He has nowhere near the pure physical talent of either Michael or Aaron, but he is light years ahead of them as a player and a leader; in fact, at a level they simply don't have the capacity to reach. I do hope Aaron gets his job back in Oakland and can at least finish his career respectably, though Oakland will have to find an entire new offensive line before any QB will be able to do much of anything there.

Offline
One of the many commentators on either ESPN or NFL Network yesterday (can't for the life of me remember which or who it was!) actually said, paraphrasing, "I wish we would stop talking about Vick until he actually DOES something like take his team to the Super Bowl which he was supposed to have done by now." How I wish more of the talking heads would take that to heart (and while they're at it, the Cowboys/T.O. too!). Just as I'm sure others are sick of hearing about Reggie until he's actually doing something on a regular basis, I'd rather hear about the players who ARE doing something. Well, actually, I'd like to hear on a regular basis how awful Vick is, THAT, I could probably deal with.

Reggie has played 9 games and Vick has been in the league since 2001.

Reggie has played 9 games and Vick has been in the league since 2001.
Click to expand...

What's your point? No, actually, I get your point, but the "Vick is God" talk has been going on for years and years. He was supposed to have taken the Falcons to about 3 or 4 Super Bowls since then, can't really be thought of as anything but a failure in terms of the expectations, and, yet, still, he's talked about incessantly. Reggie I think will eventually live up to his expectations; but if he doesn't, he will still get talked about because of the mountain of hype that he entered the league and everyone will be sick of it.

Online
Reggie's got a better chance of living up to his hype than Vick does.
Show hidden low quality content