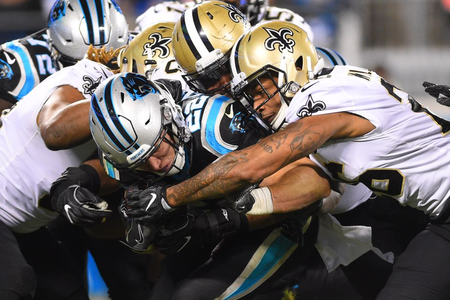 Ranking at the top of the league in several statistics, the Saints have excelled against the rush in 2018

By By Dave.Schofield | SB Nation

In his weekly press conference, Mike Tomlin made a special note of the New Orleans Saints league rankings in run defense for 2018.

“I’d be remiss if I didn’t mention that there are number one in football versus the run. Part of that, obviously, is being a 12-2 football team. I understand that having leads and so forth, but I’d be remiss if I didn’t mention that their number two in the league versus the run in terms of yards per carry. So they’re probably not getting a lot of carries because of the nature of the game or the circumstances that they’re in but you better acknowledge that they are just formidable at stopping the run period. Because the yards per carry illustrate that as well.”

The Saints currently lead the NFL with the fewest rushing yards allowed with 1,107 yards. Subsequently, they are tied with the Philadelphia Eagles for the fewest number of rushing attempts against them with 301. When it comes to yards per carry, the Saints are averaging 3.68 Y/A, second only to the Houston Texans at 3.56 Y/A.

Coach Tomlin was asked if New Orleans’ statistics against the run were due to the game circumstances of teams having to play catch up against them. ...