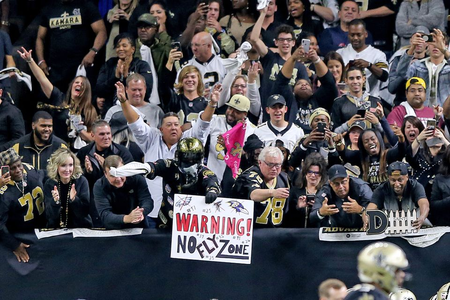 Your plate wasn't the only thing filled to overflowing over last week's Thanksgiving holiday. So was the New Orleans Saints bandwagon.

According to ratings figures supplied by NBC Sports, the Thanksgiving-night matchup between the Saints and their NFC South division rival Atlanta Falcons drew 21.9 million total viewers, making it the most-watched Thursday-night primetime game of the 2018 NFL season -- and the most-watched Thursday-night game since the 2017 season opener between the New England Patriots and Kansas City Chiefs.

It was also the most-watched program of the night, marking an audience increase of 18 percent over last year's Thanksgiving-night matchup between the New York Giants and Washington.

Even more impressive were the ratings figures the Saints-Falcons game earned in New Orleans, where it notched an extraordinary 52.3 rating and a 75 share. That means 52.3 percent of the households in the metro area, and 75 percent of all TV sets in use in the city at the time, were tuned in to the game. ...