Offline
We all know how the Saints like to fill holes thru FA, and go into the draft and take the "BPA when they're on the clock... here's how I think the Saints offseason will go...

David Patten - still has plenty left in the tank, and was a solid locker room guy for our youngsters.
Jonathan Goodwin - Versatile player that can provide solid veteran depth at center and guard. Best-case senario he could start at center... worst-case he could backup at both spots.
Billy Miller - Solid TE... dependable receiver and decent blocker.
Jamie Martin - Yeah yeah I know... but really... would you trust someone coming in new to the system over a guy that has been in the system for 2 years now? Sure he's a fossil, but Payton loves him, and I don't see why Martin won't be on the roster again this year while they groom a youngin.

Saints know that they are in need of playmakers on the defensive side of the ball, so they go out and get the best LB in free agency... they sign Lance Briggs and move to MLB. They outduel the 49ers for Briggs' services.

The Saints also go out and get OLB Brendon Ayanbadejo from the Bears. He wants to get his shot for playing time at OLB... since the Saints signed Shanle to a big contract they will bring in a hungry guy like Ayanbadejo to compete for the starting job, and at the very least... if (for some strange reason) Shanle wins the spot... Ayanbadejo could either back Shanle or Fujita, and can be our special teams ace (He's in hawaii now as the NFC special teamer).

Saints lose out on Corey Williams and Randy Starks, but they get a solid player in DT Tommy Kelly from Oakland (Ms State). Here's some tidbits from Scouts INC.

He has excellent size and strength for the position. He possess a very good combination of athletic ability, size, and strength. He is a big defensive tackle that can run. He is a very good athlete for his size. He also plays with very good leverage for a tall defensive tackle. He shows strong hands to throw blockers and shed blocks. He has improved his techniques as a run down player and pass rusher. He is multi dimensional as a pass rusher. He can win with power or quickness. He can get low and generate a bull rush. He can take the guard or center and walk him back.

The Saints will probably not break the bank on a CB with such a deep draft at the position, so they get a solid vet with good cover skills from Philly in William James. The former Will "Peterson" will come in and compete for a starting spot with Usama, Craft, and David.

Last FA signing... Andre Davis... Davis will be the speedster this offense needs. he has reliable hands... and has added value as a great returner.

** I'm doing this with no trades

1. Leodis McElvin - CB Troy: With Dorsey, Gholston, and Ellis off the board... the Saints try to move out of the 10th spot, but find no takers. They "settle" for a good man cover CB... which happens to be the best CB in the draft. I looked at both he and Mike jenkins... and Jenkins has character concerns that may have swayed my decision here...

Very athletic...Has good size...Excellent timed speed with a burst to close...A solid tackler...Outstanding footwork...Great hands...Has fluid hips and is smooth in his transition...Natural man coverage skills...True playmaker who is a threat to take it the distance every time he gets his hands on the ball...Also a dynamic return man.

2. Fred Davis - TE USC: Saints take the best TE in this year's draft... and hopefully could be as good as Antonio Gates. I've looked at a ton of mocks and predictions... and none of them that I've seen so far has Davis going in the 1st. I hope he could slide even more at the top of the 2nd...

An athletic tight end with good quickness and speed for the position. Does a good job of avoiding the jam at the line and shows good release quickness. He has long arms and big hands. Very reliable short-to-intermediate receiver. Doesn't let the ball get into his pads often and shows very good hand-eye coordination for his position. He can pluck on the run and gets upfield quickly. Displays a knack for finding open windows on short-to-intermediate routes. Is fast enough to occasionally stretch the seam vertically. Will consistently separate from SLB's one-on-one.

3. Trevor Laws - DT Notre Dame: The Saints' defensive youth movement continues... they take the tough DT from ND... Laws makes plays from the DT spot... he had over 100 tackles in his senior year, which is a crazy stat for any DT at any level.

Gets good forward lean in stance, anticipates the snap well and can get into the backfield. Moves well laterally, slants well and runs line stunts well. Works from snap to whistle, takes sound angles to the ball and makes plays in pursuit. Reads keys fairly well and can sniff out screens. Stays balanced, uses hands to protect legs and rarely gets knocked to the ground by cut blocks. Wraps up upon contact, shows good body control and is an effective open field tackler.

4. Eddie Royal - WR Va Tech: Its strange to see ESPN (McShay) rate Royal as the 22nd WR... if this holds true... he'll be around in round 4... and Royal can be our slot guy with great hands and excellent quickness. he can also contribute in the return game.

Explodes off the ball, creates space by driving corners back and can get open quickly. Changes directions quickly, runs adequate routes and can separate from man coverage. Can make the first defender miss, shows a second gear when gets a seam and can turn a catch underneath into a long gain.

5. Kirston Pittman - DE LSU: Saints need DEs that can get after the QB... and Pittman comes from a system that does just that. We won't need him to come in and start... but rather give us the dynamic that Mark Anderson brought to the Bears... and Justin Tuck did for the Giants.

6. John Sullivan :scared: - C Notre Dame: Saints take another ND center (Faine)... this is depth pick... and also to prepare for the future. He may not see the active roster this coming season (barring injury), but he'll have a chance to get adjusted.

Rarely takes false steps, shows adequate burst of the ball and generally gets into position quickly. Flashes a strong punch, gets adequate hand placement and rarely loses a battle once locked on. Plays with adequate leverage when run blocking and has the lower body strength to drive defenders off the ball.
Click to expand...

7. Paul Smith - QB Tulsa: Smith is a good prospect, and could have a chance to beat out Palko this offseason.

Understands the offense, spreads the ball around and can be effective when takes what the defense gives him. Is accurate when sets feet, puts good touch on passes and can lead receivers when throwing underneath. Has good mobility, throws fairly well on the run and can buy some time. Has adequate top-end speed, shows good vision and can pick up yards with feet. Confident, wants the ball late in the game and is a leader.

What ya think? I know that I may be missing a player or 2 from one of those unknown D-III schools... but hey... it's all guesswork.

Offline
One of the best and more realistic mocks I have seen so far. I think signing Briggs is a huge possibility. Sean P said it himself, we are looking to get younger and better and defense. Briggs is both of those. I love the idea of him being our MLB and being the leader of our defense. Our defense lacks an identity, and Briggs surely helps to give us one. Everything else looks sweet, and I hope it turns out this way.

Offline
Honestly that's a lot more realistic than a lot of other scenarios in here. I'd be surprised if they shelled out for Lance Briggs though.

Offline
I like it....Mickey better be ready to act fast....I have a feeling Briggs could be gone in the first 24 Hrs.

Offline
excellent job, droopy, although i do think there are trades there to be made

Offline
We would be similar GMs!
I just saved my franchise in Madden 08. I am playing on all madden, and after my first season my free agency pickups were Lance Briggs, Andre Davis, William James, and Tommy Kelly.
I kept Briggs at OLB for Shanle, and started Simmons though.
Nice and realistic.
I would like it.

Offline
I like the moves except for the OLB Brendon Ayanbadejo... He'll be another Mark Simoneau on our team. He played along side Lance Briggs and Brian Urlacher

Offline
Realistic, no this isn't realistic...

because i love it

Offline
Wow, this is one of the most realistic, thought out, smart Saints' mocks I've ever seen


Amazing job putting all this together

Offline
Good job, Droopy. One question: did Pittman's request for a medical redshirt fall through? Last I heard he had petitioned the NCAA for a 6th year, and he and LSU felt very confident that they would get it. Is there new news on this front?
OP

Offline
Thanx fellas... I'm sure there will be a trade or 2, but predicting trades is about as pointless as these mocks... almost like farting in the wind

I trust our FO will do whats right to get our team back in contention.

I hope they realize the offseason is a chance to make your team better, and not remain stat quo. We have a tone of $$ to spend on free agents, and we are high enough in the draft order to pick up some pretty good players that can contribute NOW rather than later.

One more point... the 2007 draft was full of guys that didn't do much if anything at all, so in essence... we'll have 2 draft classes worth of young talent... last year's draft may not be as useless as it seems.


kevison said:
Good job, Droopy. One question: did Pittman's request for a medical redshirt fall through? Last I heard he had petitioned the NCAA for a 6th year, and he and LSU felt very confident that they would get it. Is there new news on this front?
Click to expand...

I'm not sure on the status... I totally forgot about him until I saw his name and ranking on the nflcountdown draft site... ESPN doesn't even have him ranked/rated... and maybe I'm trippin, but did he not play in the senior bowl? Maybe I AM trippin...

Offline
awesome job, and I would be happy if all that happened.

The only thing I would add is I would re-up Jahri Evans, because I think his contract will be end next year. 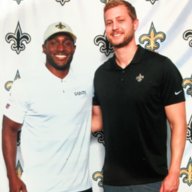 Offline
awesome draft and free agents signings. Also i like the tight end pick in the 2nd, but if Curtis Lofton is still there at #40 i'd take him and make him MLB and keep Briggs as an OLB.

Offline
you think the bears are going to let both briggs and Ayanbadejo, both being OLB's leave?
would be sweet to happen. but think likelihood is nill.
Show hidden low quality content